The award is the product of a highly successful 17-year partnership between local school districts in Suffolk County and the award organizers. 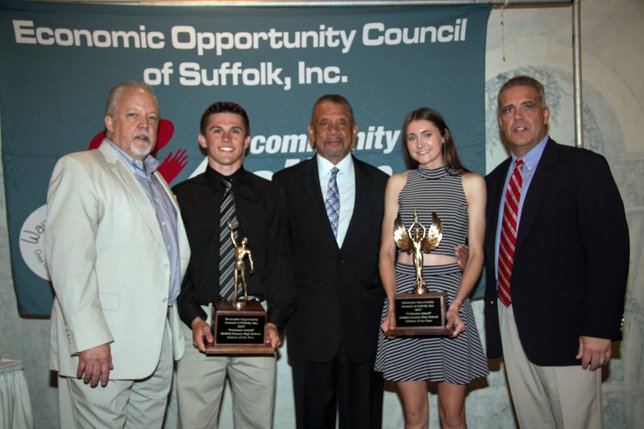 Long Island, NY - June 27, 2017 - Hauppauge High School senior Katie Murphy and West Islip High School senior Patrick Carter were recently honored with the Butch Dellcave Award at a ceremony held on June 11, 2017 at Villa Lombardi’s in Holbrook.
Named in memory of the legendary educator, official, and coach Gaetano “Butch” Dellecave, the award is the product of a highly successful 17-year partnership between local school districts in Suffolk County and the award organizers: the Economic Opportunity Council of Suffolk, the Butch Dellecave Foundation, and Newsday.
Athletic Directors from all sixty-six Suffolk County school districts are asked to nominate one male and one female from their high school senior class. Nominees must be students who are not only at the top of their game, but also score high in classroom performance and in their commitment to local community service.
Murphy, a former News 12 Scholar-Athlete, was a starting player on the varsity basketball team for all four years at Hauppauge High School.  As a junior, she was the team’s Most Valuable Player, the leader in points, assists, steals, as well as an All County selection. Murphy is only the 5th player in Hauppauge history to score 1,000 career points in basketball.  Murphy also excels in Cross-Country – she was a two-time All County as well as an All State in that sport.  She had a 96.7 GPA and will be attending Adelphi University in the Fall.
Carter was a six-year varsity swim team member where he served as team captain. He is a three-time All State, a five-time All Long Island, a five-time All County, and a five-time State Meet Qualifier. Remarkably, Carter has been undefeated in dual meet competitions since the start of 8th grade.  He is a five-time state scholar-athlete with a 96.7 GPA, a member of the National Honor Society, the World Language Honor Society, and the National Society of High School Scholars. Carter will be attending the U.S. Naval Academy in the Fall.
About the Economic Opportunity Council of Suffolk, Inc.
The Economic Opportunity Council of Suffolk, Inc. – a not-for- profit 501(c)(3) community-based organization – is celebrating its 50th anniversary. It is the county’s federally designated Community Action Agency, designed to assist low-income families and individuals. The agency’s mission is to promote a goal of self-sufficiency by broadening the minds of children, revitalizing communities, and assisting families and children in need through coordination of public and private resources.