The grant will assist a study on how the removal of Namenda from the marketplace and the use of its substitute will impact the patients with Alzheimer’s. 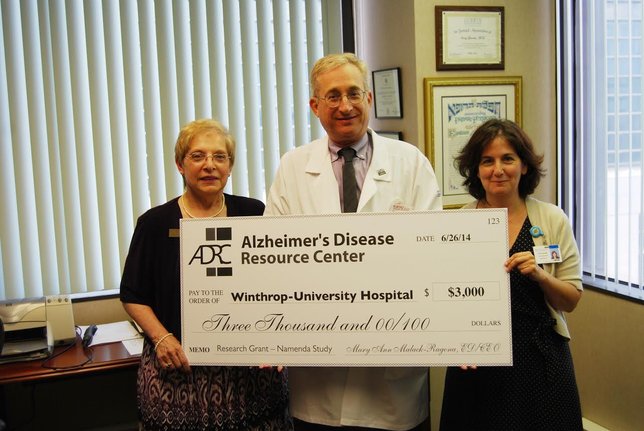 Mineola, NY - June 27, 2014 - On June 26, Mary Ann Malack-Ragona, Executive Director/CEO, Alzheimer’s Disease Resource Center, Inc., presented a check in the amount of $3,000 to Dr. Irving H. Gomolin, Chief, Division of Geriatric Medicine, Winthrop-University Hospital, in Mineola. The grant will assist Dr. Gomolin’s study on how the removal of Namenda from the marketplace and the use of its substitute — an extended release formulation — will impact the blood levels of patients with Alzheimer’s Disease or dementia.
Namenda — also known as Memantine — is an oral medication used to treat moderate to severe dementia related to Alzheimer’s Disease. While it does not cure AD, it may improve memory, awareness and the ability to perform daily functions. Namenda works by blocking the action of glutamate, a natural substance in the brain that is believed to be linked to symptoms of AD.
The standard tablet formulation of the drug is being removed from the marketplace in August 2014 without any available generic versions in the U.S. because patent rights to the drug do not expire until 2015. Instead, Alzheimer’s patients can be switched to an extended release formulation of Memantine.
The grant came from part of an anonymous donation that ADRC recently received. This was the first research study the organization has funded.
Alzheimer’s Disease Resource Center, Inc. — which is headquartered in Bay Shore and has a satellite office in Southampton — is the only local Alzheimer’s Disease advocacy and educational facility whose mission is to provide hands-on support and services to families on Long Island and the New York metropolitan area. ADRC works with family members, health care professionals and researchers to ensure quality health care and support to those impacted by Alzheimer’s Disease through care and consultation, information and referral, training, support groups, and caregiver safety products.
Pictured (left to right): Mary Ann Malack-Ragona, Executive Director/CEO, Alzheimer’s Disease Resource Center, Inc.; Dr. Irving H. Gomolin, Chief, Division of Geriatric Medicine, Winthrop-University Hospital; and Linda Martinez, Licensed Clinical Social Worker, Department of Geriatrics, Winthrop-University Hospital.