In her five seasons, Rios has helped her team reach the playoffs each year. 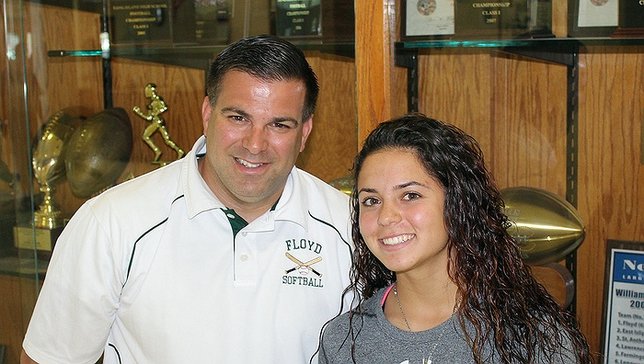 Mastic Beach, NY - June 26, 2018 - In what has been a tremendously successful William Floyd softball career, senior shortstop Jayna Rios capped off her final season as a Colonial earning several accolades including Suffolk County League I Large School Player of the Year, League I Player of the Year, New York State Sportswriters Association’s All-State (first team) and Newsday’s All-Long Island (first team). Rios, a five-year varsity player, helped lead the Colonials to two playoff victories in 2018.
In her five seasons, Rios has helped her team reach the playoffs each year. During that time, she has hit 36 home runs, driven in 123 runs, and hit for a .443 batting average. For her All-State senior season, Rios registered 34 hits, 13 home runs, 35 RBIs, and finished with a batting average of .486 and an on base percentage of .581.
“It has been a great experience. I came up when I was younger and got to see the older players and learn from them. The players, the coaching staff, the whole environment has been great,” said Rios as she reflected on her William Floyd softball career. “I won’t forget when Molly Peymann (2014 graduate), who was a senior at the time, told me to switch positions with her and move to second base from left field. I was only in eighth grade at the time but that made me realize that you have to be a team player and keep your head up to help better the team.”
When asked about one memory that stands out to her, Rios said that when the varsity team made the playoffs in 2014 during her eighth-grade season, breaking a long playoff drought, is one that she will cherish the most.
“I would like to say thank you to all my coaches for a great five years. To my assistant coaches over the years and head coach Fred Luhrs who has done a great job of coaching and preparing me during the summers and given all of us the time and drive and putting in the many hours for us,” said Rios.
Fred Luhrs, head varsity softball coach, has had a front row seat watching Jayna develop as both a player and person. “Her work ethic and her drive have been great to watch,” said Coach Luhrs. “She understood the lessons behind my speeches. Her maturity both as a player and as a person has really been impressive, she’s an outstanding young lady who has and will continue to achieve so much in her life. Her work ethic and the time she has put into this game has rewarded her.”
Regarding her teammates, Rios said, “We had a great run. I will cherish the memories we got to share with each other. This past season was the best we all ever had.”
Rios will be attending LIU Post next fall, where she will major in physical education and suit up for the Pioneers on a full athletic scholarship. She has aspirations of coming back to William Floyd to be a gym teacher.
When asked how Jayna has represented the William Floyd School District during her playing career, coach Luhrs said, “She has listened to every word I have said to her. She has represented the program, her family, her name, and the district with the utmost professionalism. I tell all my players that when you wear the jersey, you represent more than just yourself and the team. I have received many compliments from others about Jayna. Whenever something didn’t go her way, whether it was a strikeout or a bad call, she never acted immature or out-of-line. That’s what we look for and that’s what she has represented.”
Jayna said that she is most proud of putting William Floyd softball back on the map. “When I first saw the banners in the gym I thought to myself ‘I have to make William Floyd softball known again.’ That is what helped drive me.”
Jayna Rios’s accolades: