"We have been moved by Anne through her writing. Let us remember Anne Frank." 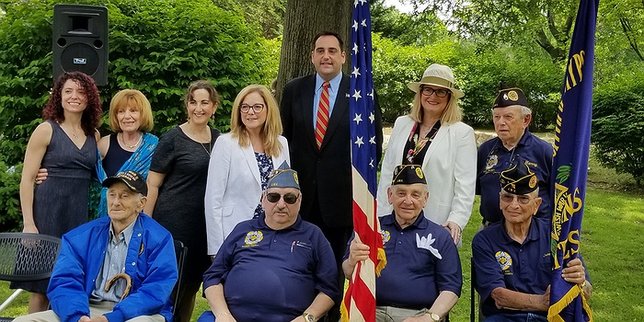 Melville, NY - June 26, 2018 - Huntington Town Supervisor Chad A. Lupinacci and Suffolk County Legislator Susan A. Berland co-hosted the Town of Huntington’s 8th Annual Anne Frank Memorial Ceremony celebrating the life of Anne Frank, on Sunday, June 24, in the Anne Frank Memorial Garden at Arboretum Park.
“We have been moved by Anne through her writing. Let us remember Anne Frank. The child who braved unspeakable tragedy; the child whose writing allowed people from generations to come to bear witness to the horrific crimes that took place not so long ago,” said Supervisor Lupinacci. “Let us remember that there were millions more, who suffered a similar tragedy, whose faces remain in the shadows.”
“It was my pleasure to participate in the Town of Huntington’s annual celebration honoring the life of Anne Frank,” said Legislator Berland. “May Anne’s legacy of wisdom and her genuine belief in the goodness of mankind, despite the ugliness of war and discrimination, continue to teach and inspire us for generations to come.”
Supervisor Lupinacci and Legislator Berland were joined by Councilwoman Joan Cergol; Jewish War Veterans Post #488 for the presentation of the colors; Rabbi Susie Heneson Moskowitz of Temple Beth Torah, who delivered the invocation; Cantor Sarene Appelbaum of Temple Beth Torah, performing musical selections; and resident of the Greens Sara Lefsky, who shared a moving story of her parents' experiences surviving the Holocaust.
“When we remember Anne Frank on what would have been her 89th birthday, we must focus on her personal strength, resolve and goodness. Her beautiful human spirit could not be broken in spite of the tragic injustices heaped upon her and family. While Anne seemingly forgave the unforgiveable, and to a certain extent we can all learn from that, in doing so we must never forget to identify and stand up to human injustice in all of its forms. That is the best way we can honor and celebrate the legacy of this remarkable young woman whose voice continues to speak to us today through her enduring and still painfully relevant diary,” said Councilwoman Cergol.
Refreshments for the ceremony were provided by Hummel Hummel Bakery in East Northport and 7-Eleven in Melville.
The Anne Frank Memorial Garden symbolically captures the journey of Anne Frank’s life.  It features a circular pathway that surrounds a garden, which leads to the sculpture of a young girl’s dress. The Memorial Garden serves as tribute to Anne’s legacy of wisdom and genuine belief in the goodness of mankind and human nature, despite the ugliness of war and discrimination.