Investigation Into Barclays’ Dark Pool and Electronic Trading Business Uncovered an Alleged Pattern of Fraud and Deceit, Misrepresentations to Investors 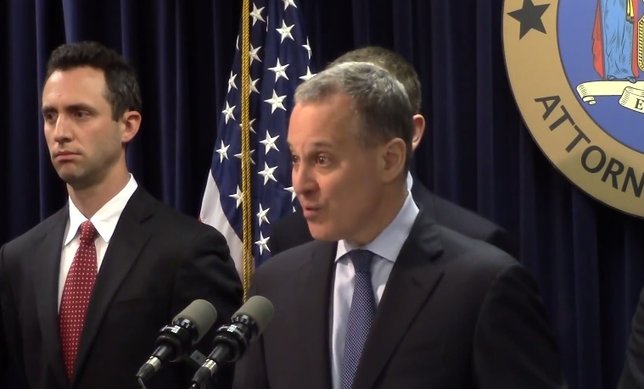 New York, NY - June 26, 2014 - Attorney General Eric Schneiderman today announced a lawsuit against the international bank Barclays, arising from the operation of Barclays’ dark pool and other aspects of its electronic trading division. The complaint alleges Barclays has dramatically increased the market share of its dark pool through a series of false statements to clients and investors about how, and for whose benefit, Barclays operates its dark pool. Contrary to Barclays’ representations that it has implemented special safeguards to protect clients from “aggressive” or predatory high-frequency traders, Barclays is accused of operating its dark pool to favor high-frequency traders.
“The facts alleged in our complaint show that Barclays demonstrated a disturbing disregard for its investors in a systematic pattern of fraud and deceit,” Attorney General Schneiderman said. “Barclays grew its dark pool by telling investors they were diving into safe waters. According to the lawsuit, Barclays’ dark pool was full of predators – there at Barclays’ invitation.”
The complaint alleges that Barclays falsified marketing material purporting to show the extent and type of high frequency trading in its dark pool.  For example, Barclays removed from a marketing document intended for institutional investors the dark pool’s then-largest participant – a high frequency trading firm Barclays knew engaged in predatory behavior in the dark pool.  In response, one employee stated:  “I had always liked the idea that we were being transparent, but happy to take liberties if we can all agree.”
Barclays heavily promoted a service called Liquidity Profiling, which Barclays claimed was a “surveillance” system that tracked every trade in Barclays’ dark pool in order to identify predatory traders, rate them based on the objective characteristics of their trading behavior, and hold them accountable for engaging in predatory practices.
Contrary to those promises, the complaint alleges that:
The complaint further alleges that, contrary to Barclays’ representations that it protects clients from aggressive or predatory high-frequency trading in its dark pool, Barclays in fact operates its dark pool to favor high-frequency traders and has actively sought to attract them by giving them systematic advantages over others trading in the pool. As alleged in the complaint, this included:
Today’s complaint results from Attorney General Schneiderman’s Insider Trading 2.0 initiative and an intensive investigation into Barclays’ practices. The investigation was aided significantly by a number of former Barclays’ employees, who observed much of the conduct described in the complaint. These witnesses helped advance the investigation by providing meaningful information and testimony.
“No regulator – no matter how broad their authority – can succeed on its own,” said Attorney General Schneiderman. “I want to personally thank those that have courageously reported wrongdoing to our office and encourage others to do the same.”
Attorney General Schneiderman launched his Insider Trading 2.0 initiative over one year ago, and began examining the multitude of special relationships and early access to market-moving information that are far too prevalent in today’s electronic markets. Since that time, Attorney General Schneiderman has cracked down on early peeks at market-moving data on consumer and analyst sentiments, and he has worked to end the distribution of corporate earnings releases directly to high-frequency traders ahead of the investing public.
The Barclays investigation and litigation is led by Chad Johnson, Chief of the Investor Protection Bureau; Nicholas Suplina, Senior Advisor and Special Counsel; and Assistant Attorneys General John Castiglione, Jordan Salberg, and Rebecca Reilly.  Karla G. Sanchez is the Executive Deputy Attorney General for Economic Justice.