The Homicide Squad is investigating a shooting that occurred in Roosevelt on Wednesday, 06/22/16 at 3:45 P.M.

Malique Shelton, 16, of Roosevelt, has been arrested in connection to the crime.

Update - January 19, 2017 - Homicide Squad detectives report the arrest of a Roosevelt man for an incident that occurred on Wednesday, January 4, 2017 in Roosevelt which, as a consequence, connected him to other prior crimes.

According to detectives, Malique Shelton, 16, of Roosevelt, after being recognized and observed by First Precinct officers driving a “Dirt Bike” in an erratic manner on Park Avenue and Valentine Avenue, including driving on sidewalks in an attempt to evade officers, was able to flee without being stopped.

A subsequent investigation led investigating detectives, on Wednesday, January 18, 2017, to Mollineaux Avenue and Washington Avenue at 6:55 pm, where Shelton was placed under arrest.

The original press release and an earlier update is below.

Crime Stoppers and the Nassau County Police Department’s Homicide Squad are seeking the public’s help in identifying a subject(s) in connection with a HOMICIDE which occurred in Roosevelt, New York.

On Wednesday, June 22, 2016 at approximately 3:45 P.M., the pictured 37-year-old victim was shot by unknown subject(s) on Wagner Avenue in Roosevelt, New York. 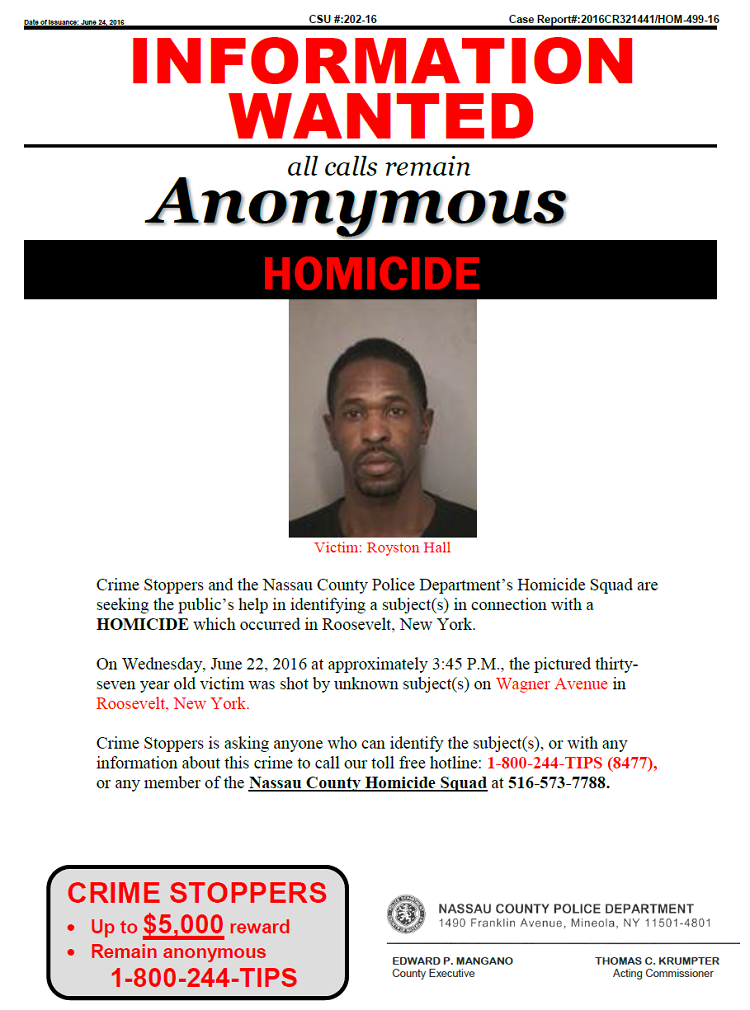 According to detectives, First Precinct police officers responded to a 911 call for a male shot and determined that the shooting had occurred at 28 Wagner Ave.  The male victim, 37, who sustained a gunshot wound, was transported to a local hospital where he was pronounced dead by a staff physician at 4:47 P.M.  The deceased’s identity is not being released at this time.

Detectives ask anyone with information regarding the above listed crime to contact    Nassau County Crime Stoppers at 1-800-244-TIPS.  All callers will remain anonymous.