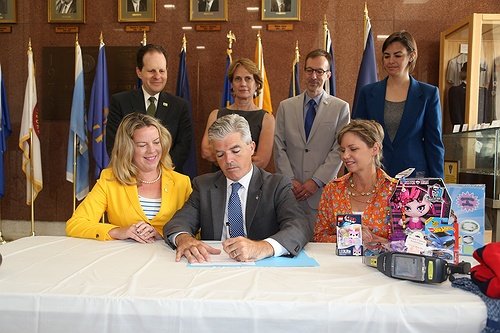 Hauppauge, NY - June 23, 2015 - To the applause of parents, environmentalists and health and safety advocates, Suffolk County Executive Steve Bellone today unanimously approved a proposal intended to safeguard children by prohibiting the sale of new toys containing six toxins that pose a threat to childhood development.  Under the law, all new toys sold in the County will need to be in compliance with stricter limits on Antimony, Arsenic, Cadmium, Cobalt, Lead and Mercury than current federal regulations. The initiative known as the “Toxin Free Toys Act" was introduced by Legislator Kara Hahn (D-Setauket) in April and unanimously approved by lawmakers earlier this month.  Legislator Hahn sponsored the legislation in response to a report issued by the New York League of Conservation Voters and Clean & Healthy New York that found several products containing carcinogenic components on the shelves of Long Island stores.  The dangerous materials identified in toys tested in that report have been linked to cancer, cognitive impairments, hyperactivity and genetic disorders in children.

Enforcement of this law will be through the Suffolk County Department of Health which will first notify retailers beginning in January, 2016.  Then in December, inspectors will begin conducting random checks for toys and other children’s products containing toxic content with an x-ray fluorescence analyzer, which evaluates items for chemical their compositions.

“Today, I stand here with my colleagues in government, sponsors of the legislation-Legislators Kara Hahn and Sarah Anker to sign into law the Toxic Free Toy Act in an effort to protect our must vulnerable populations in Suffolk County, our children,” County Executive Bellone said just prior to signing the bill into law.  “Suffolk County is following the lead of other municipalities in New York-Westchester and Albany by banning the sale of toxic toys.

Currently, NYS is in the process of deliberating a state law addressing toxic toys however, in absence of federal and state standards for toy manufactures it is incumbent upon us to ensure our children are safe.  We are hopeful that by enacting legislation on the County level this will spur dialogue and the enactment of laws on the Federal and state level.”

“As a mother, I was shocked and outraged to learn that children’s toys that I assumed were safe contained these toxic chemicals,” said Suffolk County Legislator Hahn.  “This law will give consumers the confidence to know that toys on store shelves in Suffolk County aren’t going to give their children or grandchildren cancer, developmental disabilities respiratory, cardiovascular or gastrointestinal disorders.”

“I am proud to co-sponsor the Toxic-Free Toys Act, another important initiative that is consistent with this Legislature’s long and proud history of protecting the health of our most vulnerable residents, our children.   We have never been afraid of challenging the status quo, particularly when it comes to the priority of ensuring our children’s health,” Legislator Steve Stern said.  “We strongly believe that this legislation will have a significant impact in protecting the health of our young children by helping to ensure that their toys are safe.”

Legislator Sarah Anker, co-sponsor of the Toxin Free Toys Act said, “It’s been over 35 years since the United States federal government banned the use of lead in home paints to safeguard the health of our children.  It's time we insist on the same level of commitment to protect our kids from toxic chemicals found in our children's toys."

"Albany could learn a lot from this demonstration of true leadership on the part of Legislator Hahn and Executive Bellone," said Kathleen A. Curtis, LPN, executive director of Clean and Healthy New York. "Further, this remarkable display of broad bipartisan support shows that protecting Suffolk County's children is something we can all agree upon."

“This bill took a lot of thought, time and input from experts to craft. I’m confident that, in the end, we have an excellent piece of legislation that will work to protect our children from toxic toys. I want to commend Legislator Hahn for leading the way, it has been a productive experience working with her on this important issue,” stated co-sponsor Legislator William R. Spencer, M.D.

Cecil D. Corbin-Mark, Deputy Director of WE ACT concluded by saying, “By signing the Toxin Free Toys Act into law, County Executive Bellone has demonstrated real leadership for the more than one million people in Suffolk County. Particularly the most vulnerable, he is balancing both the needs of low income parents and businesses, while protecting the children of Suffolk County.”