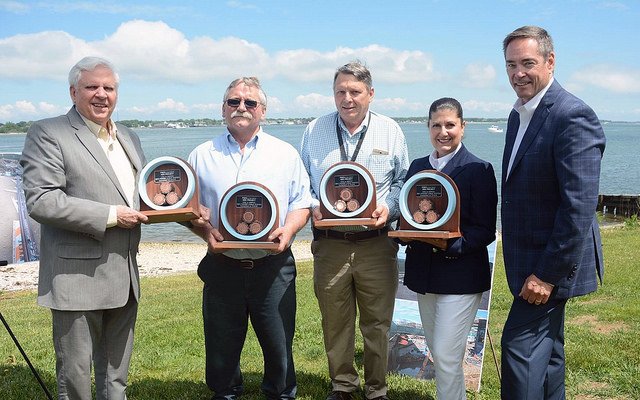 Uniondale, NY - June 21, 2018 - PSEG Long Island has successfully completed the installation of an underwater electric cable to Shelter Island in time to meet peak demand during summer’s extreme heat.
The distribution cable, which travels under the Shelter Island Sound from Greenport to Shelter Island, is necessary to handle the ever-increasing electrical demand on Shelter Island and the East End.
“We are pleased to announce the Greenport to Shelter Island cable has been successfully installed and is supplying reliable power to Shelter Island customers,” said John O’Connell, vice president of transmission and distribution, PSEG Long Island. “Providing our customers with a reliable electric system is of utmost importance to us.”
In October 2017, construction crews began the delicate process of boring three underground conduits, or tunnels, between Greenport and Shelter Island. They then installed the electric cable in one of the conduits, leaving the other two as backups. The major construction work was completed by May 15.
“We thank PSEG Long Island for providing Shelter Island with the reliable power it needs. PSEG Long Island and its contractors were professional and great to work with,” said Stella Lagudis, General Manager of the Shelter Island Heights Property Owners Corporation. “The execution was flawless.  We also thank the Village of Greenport for collaborating on this project.”
Prior to Superstorm Sandy, Shelter Island was served by three distribution feeder lines, two from the North Fork and one from the South Fork. During Sandy, one of the North Fork feeders suffered damage and failed. The newly installed feeder line effectively replaces the cable lost during Sandy, and will help ensure continued reliable electric service on Shelter Island and the East End.
“The Town of Shelter Island gratefully appreciates PSEG Long Island‘s hard work, seamless construction and ensuring a continued reliable power supply to meet the growing demands,” said Gary Gerth, Shelter Island town supervisor.
Increased electrical load growth throughout the region requires additional capacity across the East End.  The new cable not only benefits the residents of Shelter Island, it reduces the stress on the main land electric system.
“We are pleased with the outcome of this important, enhanced resiliency project, which resulted in a large-scale upgrade for our residents, said George Hubbard, mayor of Greenport Village. “We thank our Village residents for their support and patience, and also thank the professional and pleasant PSEG Long Island crews and foremen.”
O’Connell continued, “We are happy to stand here on the first day of the summer to say thanks to the people of the Village of Greenport, Shelter Island and the Shelter Island Heights Property Owners for their cooperation and patience while we completed this much needed project.”
PSEG Long Island’s continuous improvements in infrastructure, technology and communications over the past four years are providing best-in-class electric reliability to customers across Long Island and the Rockaways, during the summer season and all year long.
PSEG Long Island operates the Long Island Power Authority’s transmission and distribution system under a 12-year contract. PSEG Long Island is a subsidiary of Public Service Enterprise Group Incorporated (NYSE:PEG), a publicly traded diversified energy company with annual revenues of $9.1 billion.