The team recently revealed that there would be no Family Night practice at Hofstra University in 2016. 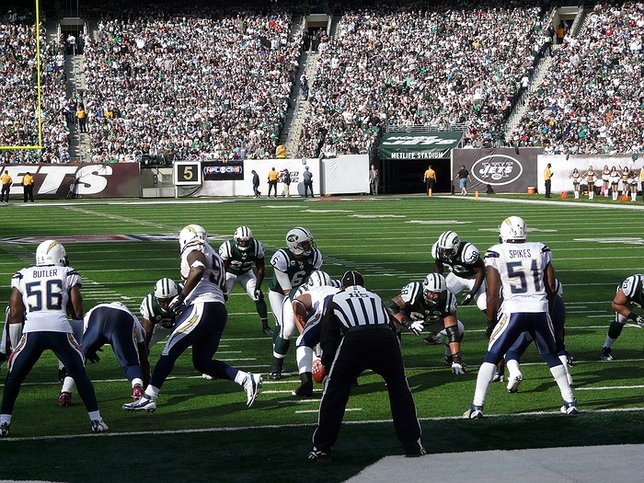 Photo by: Marianne O'Leary is licensed under CC BY 2.0

Long Island has suffered another pro-sports setback, though this one likely won't sting local fans as hard or as long as the Islanders' recent move to Brooklyn. The team announced over the weekend that "due to logistics" they would not be holding their traditional Family Night practice at Hofstra University this year. The practice was attended by over 11,000 fans in 2015.

Though the Jets have never called cultural Long Island their home, they did play on geographic Long Island for nearly 20 years, competing in Shea Stadium from 1964 to 1983. Even after moving further west to Giants Stadium in 1984, the Jets continued to maintain a presence on Long Island where much of their fan base resided, holding training camp at Hofstra University until 2008.

The Jets moved their training camp activities to SUNY Cortland in 2009, but have still held an annual practice in Hempstead in the years since.

No specifics have been revealed as to precisely what logistical factors have prevented the team from holding a practice at Hofstra this year, but a team spokesperson told Newsday that the Jets are exploring options for future events to be held on the Island.

Earlier this month the Jets did hold their annual Town Hall in Nassau County. The Q&A session between season ticket holders and team representatives was hosted by the NYCB Theatre at Westbury.

Though it may not be the consolation diehard Jets fans are looking for, Long Islanders can still enjoy watching a green-colored football team of another sort play at Hofstra University.  The famed New York Cosmos soccer franchise returned to the new NASL in 2013, and have been playing their home games at the school's James M. Shuart Stadium while winning multiple league championships in the brief time since the club's rebirth.