"Suffolk County residents still do not have a path to bike to the beaches along Ocean Parkway,” said Bellone. 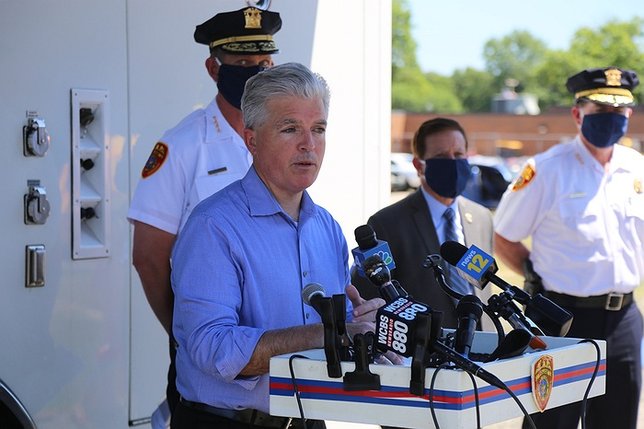 Suffolk County Executive Steve Bellone recently joined with Senator Tim Kennedy (D-Buffalo), Chairman of the New York State Senate Committee on Transportation, and members of Suffolk’s biking community to call on the New York State Department of Transportation to build a hike-bike path along the Robert Moses Causeway. The “Great South Bay Greenway”, a 5.5 mile path, would extend the recently completed Ocean Parkway Coastal Greenway over the Robert Moses Causeway and connect the path to Gardiner County Park.
“With all the progress we have made to make Suffolk County bike friendly, how is it that nearly 30 years after it was first proposed, Suffolk County residents still do not have a path to bike to the beaches along Ocean Parkway,” said Suffolk County Executive Steve Bellone. “We need the NYS Department of Transportation to extend the recently completed Ocean Parkway Coastal Greenway 5.5 miles, across Captree Island and the Robert Moses Causeway, to Gardiner County Park. This extension would afford Suffolk residents the same opportunities as their counterparts in Nassau – a safe, scenic bike path to the beach.”
Unlike Nassau County residents, currently Suffolk residents do not have the option to bike to the beaches along Ocean Parkway, rather, Suffolk County residents must drive their bikes to the beach and pay a parking fee. The creation of this path, which was first proposed in the 90s and is a key component of the County’s Hike and Bike Master Plan, would provide residents with an easy and convenient bike-path to the beach, connect a number of regional assets, support tourism, promote green transportation, and enhance safety for cyclists.
Lauren Bailey, Director of Climate Policy, Tri-State Transportation Campaign, said: "Connecting Suffolk County's bike paths to create a true network will benefit the county's health by improving safe cycling options and reducing traffic congestion. Long Island's beaches are hidden behind roadways, making outdoor recreation inaccessible without a vehicle. Improving bicycle access is a critical first step to modernizing how we get around Suffolk.”
Rosemary Mascali, Co-Chair of Sustainable Transportation Committee of the US Green Building Council LI Chapter, said: “A trail across the Robert Moses Causeway connecting to the newly opened Ocean Parkway Coastal Greenway would allow Suffolk County cyclists, runners, skaters and walkers to also enjoy our scenic waterfront. The connecting trail would also help improve our air quality, provide many health benefits, and reduce our dependency on cars.”
Carter Strickland, New York State Director for the Trust for Public Land, said: “It is critical to connect more greenways into a true network that will create the emission-free transportation network we need. Not only will the Great South Bay Greenway reduce vehicle traffic for everyone, but it will give Suffolk County residents without access to a car a safe way to enjoy Ocean Parkway beaches.”
The extension would complement Connect Long Island, the County Executive’s signature regional transportation and development plan. In 2015, County Executive Bellone first launched his Connect Long Island Initiative, a regional transportation and development plan that promotes long-term economic growth in Suffolk County through a model of increased access and mobility by alternative modes of transportation. The plan supports investments in regional mass transit systems, such as the Long Island Railroad, the implementation of new transit modes, the creation of transit-oriented developments and the connection of these transit-oriented developments and downtown areas to major research and educational institutions.
Over the last few years, Suffolk County has taken a number of important steps to make the County a bike-friendly community. In March of 2020 Suffolk County completed a Hike Bike Master Plan, which proposed over 1,200 miles of bike infrastructure. At full buildout, this new bike network would put 84% of Suffolk residents within ½-mile of a bike facility. Additionally, in September of 2019, a first of its kind regional bike-sharing program on Long Island, Bethpage Ride, was launched. The program operates 200 bikes at 40 stations throughout the County.  The County Executive also recently signed legislation that helps ensure the safety of bicyclists while out on the roadways. The new law, which is the first-of-its-kind in New York State, requires drivers to pass on the left and provide bicyclists with at least three feet of space when passing them on the same side of the road.