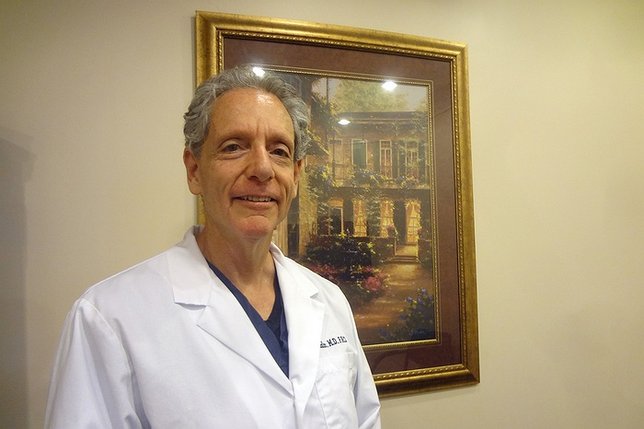 Great Neck, NY - June 20, 2018 - A graduate of Cornell University, Dr. David Mayer, of Huntington, has been a general surgeon for nearly 35 years and has previously practiced with Northwell Health Systems as a Chairman of Surgery. For the past eight years, he's been working in regenerative medicine – most recently at National Stem Cell Centers of Great Neck – and primarily with a cutting-edge, breakthrough practice known as stem cell therapy.
Stem cells are your body's own natural healing cells, and they're found in bone marrow and especially in subcutaneous fat around the midsection; fat-derived stem cells are much more plentiful in number and more effective at treating a number of ailments through therapeutic application…especially as you get older, Dr. Mayer said.
“What we do in our practice is offer stem cell therapy to a wide variety of patients who suffer from chronic pain or autoimmune and neurological conditions. We harvest fat from around the patient's midsection and process it at a registered lab, and we get hundreds of millions of stem cells,” he said. “We freeze some of the stem cells in a cryobank for future use, and we give the patients stem cell therapy where we inject it into arthritic joints or chronically painful areas of the body. It's been a journey for me, as throughout most of my career I did invasive surgery, and now we're trying to avoid invasive surgery and avoid joint replacements through the miracle of stem cells.” 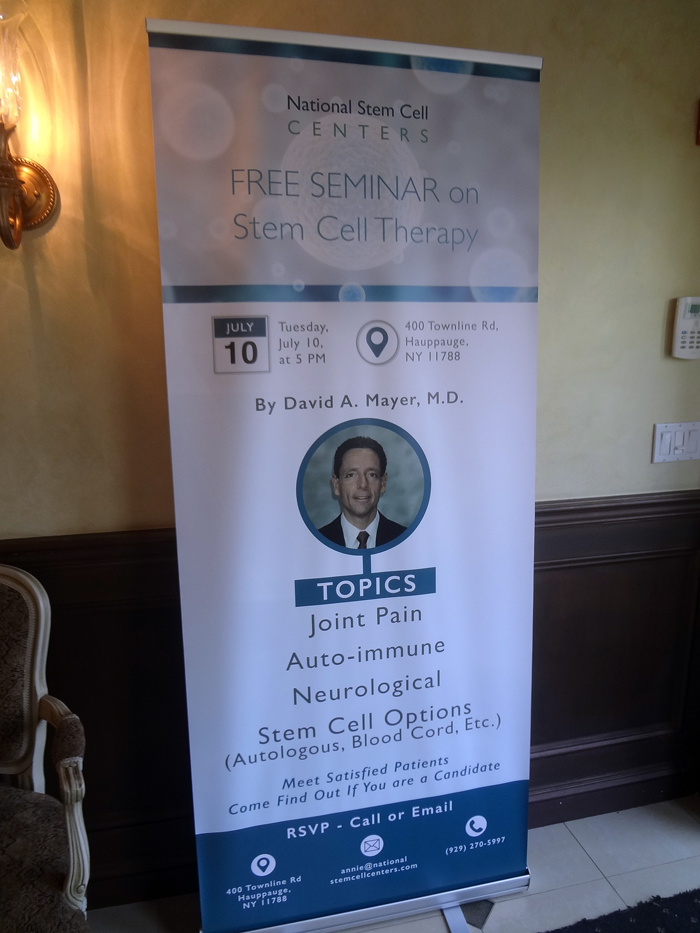 Dr. David Mayer holds seminars on stem cell therapy on a regular basis. Photo Credit: Chris Boyle
All surgeons know that major joint replacement surgery can have significant complications. Many have been on the look-out over the years for a better way of dealing with the pain and lack of mobility that sufferers of ailments; such as: arthritis, many have to contend with on a daily basis. Arthritis, which is one of the most common issues that men and women encounter as they age, is really just a fancy name for the cartilage wearing out of a joint and bone starting to rub on bone, which can cause severe pain, according to Dr. Mayer.
“That's really one of the most common patient types that we see here at my practice. So rather than have a major joint replacement, which is painful and has a long recovery, we inject a few hundred million stem cells into the joint, which regenerates the joint, and it does so with an 80 to 90 percent success rate,” he said. “We've done MRIs and x-rays on the joints after treatment, and they show that the cartilage rebuilds due to the stem cells and the joint space increases back to normal levels. We had a 56 year-old distance runner who had bone-on-bone arthritis and he was miserable because he couldn't do the one activity that he loved. So we put the stem cells in his knee, and 4 months later he let us know that he went out at just gone out for a 7 mile run and that his knee didn't hurt. We did an x-ray on his knee and sure enough, his cartilage had regenerated.”
Despite sounding great for all intents and purposes, like a literal miracle cure for a number of significant ailments, one wonders why stem cell therapy isn't more commonplace in this country. Dr. Mayer noted that one of the reasons is that the practice still endures some degree of stigma due to outdated concepts about it.
“Much of the public equates stem cell therapy with embryonic stem cells…embryonic stem cell therapy was introduced in the 1990s, and it created a religious and ethical furor, and Congress banned it initially. In addition, some patients had complications from treatments and as a result it developed a terrible reputation,” he said. “What I do as an ethical stem cell therapist is that I use mature, adult stem cells from the patient's own body fat, and there have been safety articles in our network where 3,500 consecutive patients who underwent therapy encountered no significant complications. And we have data showing that the benefit to arthritic and pain-ridden joints is excellent and permanent.” 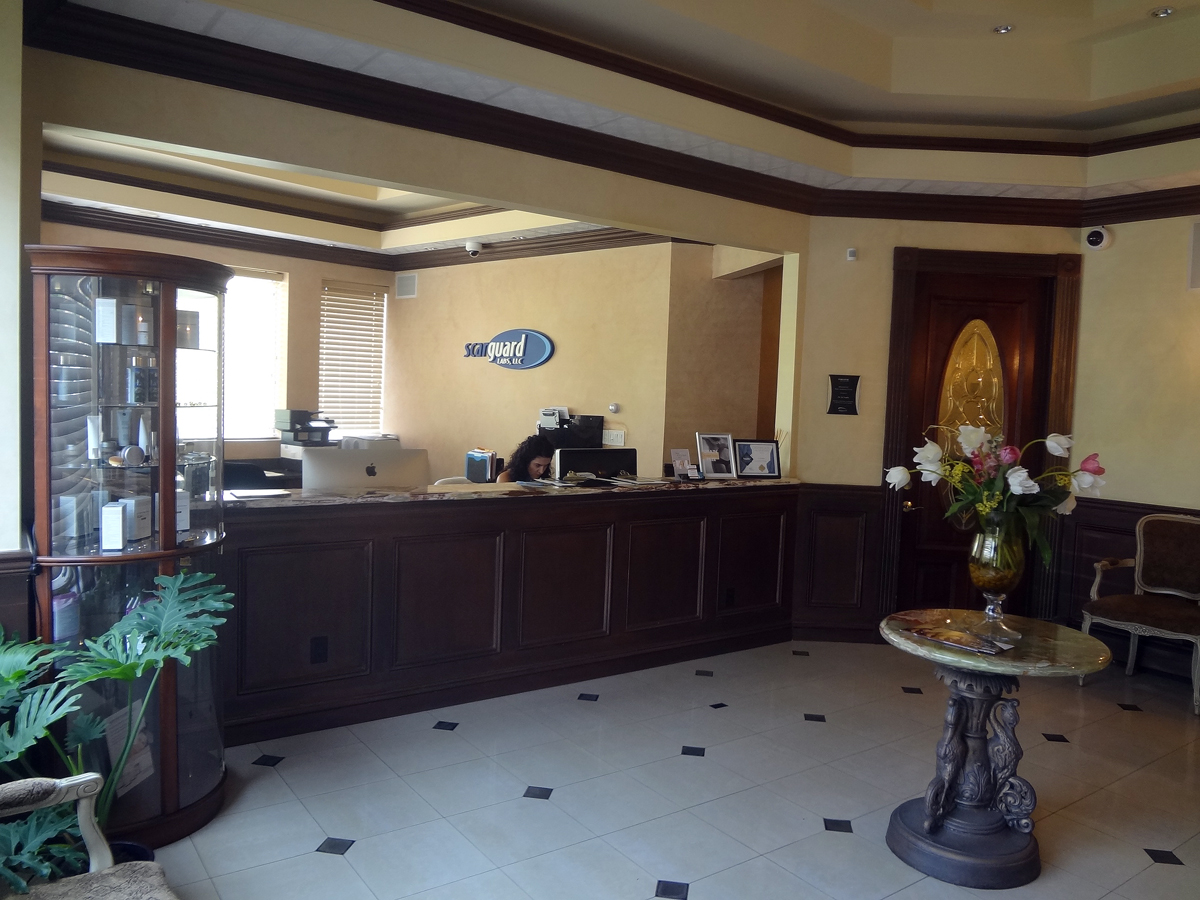 The front reception dest at National Stem Cell Centers in Great Neck. Photo Credit: Chris Boyle
Most patients see significant, permanent improvement from one single injection; however, in uncommon instances a booster shot may be required down the line, which is why the National Stem Cell Centers clinic will cryogenically store samples of the patient’s stem cells for future use if needed.
Dr. Mayer is constantly in a state of training and refreshing himself with the latest developments in the field of stem cell research to ensure that the treatment he is giving his patients is always on the cutting edge of medical knowledge. He stated that he regularly immerses himself in new literature in the field as it is released and attends national meetings, conferences and seminars dedicated to furthering and sharing the knowledge of stem cell therapy.
A great deal of data is collected and made available for Dr. Mayer’s patients in order to illustrate the effectiveness and safety of stem cell therapy; again, its capability for treating joint-related issues promises an enormous level of success; whereas, it’s treatment as relating to autoimmune and neurological conditions – while not quite as dramatic – nonetheless shows a great deal of promise.
“The patients in the short-term that could be helped the most by this treatment are the orthopedic patients, the pain patients,” Dr. Mayer said. “The percentage of patients going on to need joint replacements that we've treated is only about six percent, and this includes bone-on-bone arthritis and those patients who had already been scheduled by their orthopedists for surgery. So it's very encouraging.”
Somehow with his busy schedule, Dr. Mayer also found the time to procure a law degree from Hofstra Law School, which he said he primarily utilizes in terms of compliance in his medical profession, particularly as it relates to FDA guidelines and advisories regarding stem cell therapy.
“Many practices are doing crazy and unsafe things with their patients. They're injecting into the eyeball or the brain and causing damage, things like that,” he said. “It's very important to be safe, and I run a very selective, safe, and compliant practice for every patient that comes in my door. Also, we only use the highest quality, FDA-registered labs to process our stem cells in a completely sterile environment. We’re very compliant about how we get the cells, and how we use the cells.” 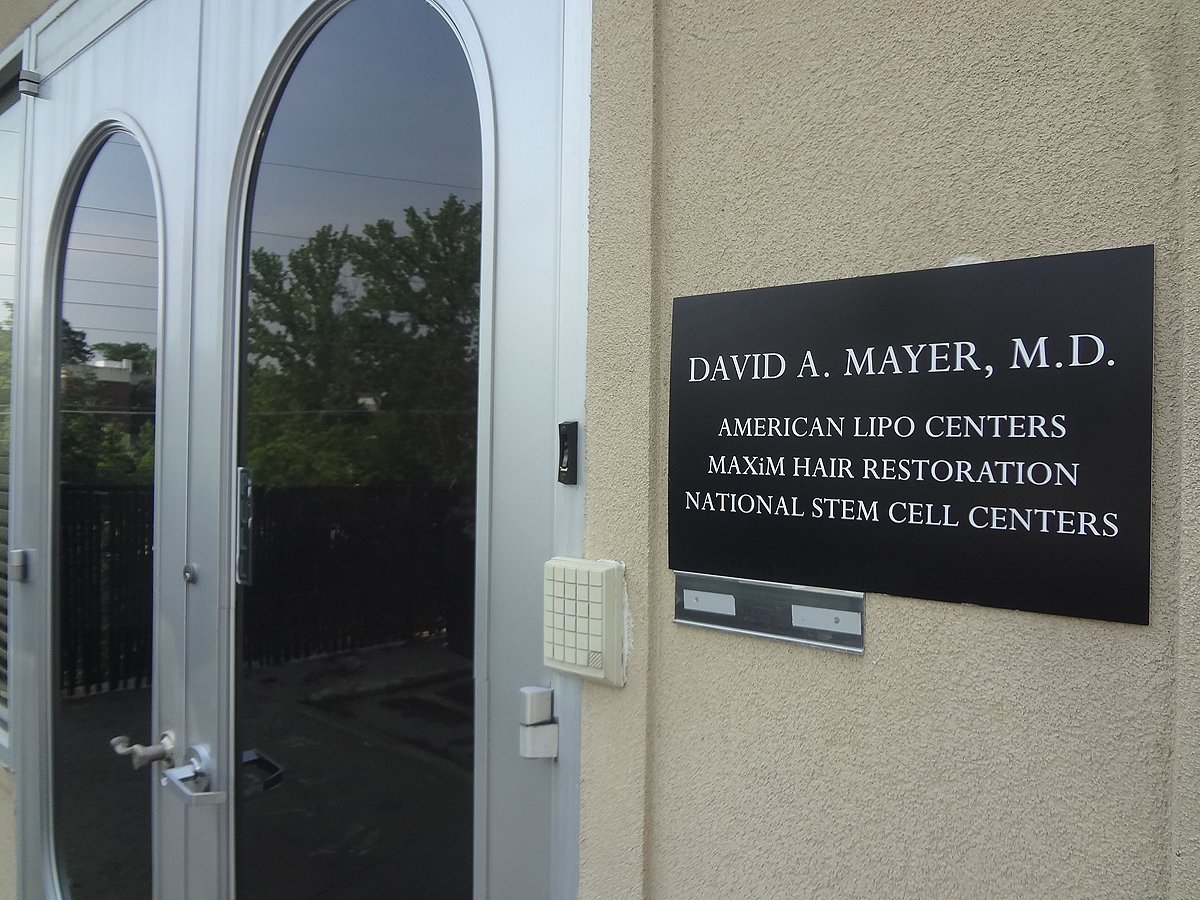 National Stem Cell Centers is located at 15 Barstow Road in Great Neck, NY. Photo Credit: Chris Boyle
Dr. Mayer also noted that there are some practices on Long Island that still offer bone marrow stem cells to their patients, which in today's medical environment is quickly becoming an outdated and far, far less effective practice in the field.
Unfortunately, considering the extraordinary effectiveness and benefits offered by stem cell therapy, the one drawback is that it is not currently covered by medical insurance. Nevertheless, Dr. Mayer noted that in order to defray the cost for patients his practice provides financing plans through third parties; in addition, they offer costs that are very reasonable when compared to what many similar practices charge.
Stem cell therapy is a natural and groundbreaking evolution of the medical arts. As time has passed throughout Dr. Mayer's career, he said that treatment options for patients have become progressively less and less invasive, and treating patients with stem cells now represents the field’s brightest and promising future yet.
“Working with stem cell therapy is tremendously rewarding for us...we recently treated a 70 year-old back patient who had had many failed surgeries, and he was permanently bent over in an almost L-shaped position with chronic pain,” he said. “We injected a couple hundred million stem cells into his spinal area intravenously, and six months later he sent us a picture of him bending over and touching his toes, saying he hadn't been able to do that in 30 years. You get remarkable results with stem cell therapy, and it's incredibly gratifying. It changes people's lives.”
To find out more, please visit www.nationalstemcellcenters.com.