Nassau County Police Officers Ronald Curaba and Joseph Laundrie were honored for their heroic actions in catching an armed robbery suspect who they arrested on June 6th. 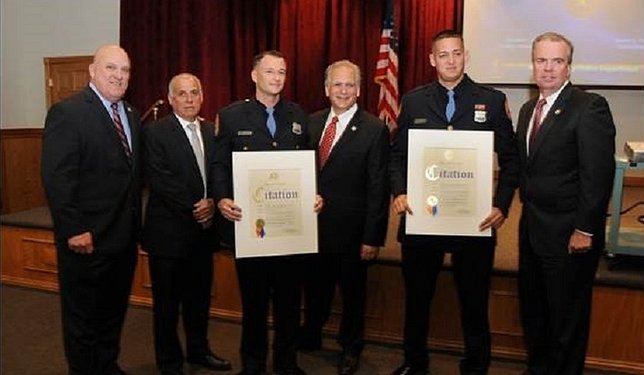 “I commend Officers Curaba and Laundrie for the outstanding job they performed in bringing this defendant to justice and helping to keep our streets safe,” said County Executive Mangano. “Our officers are known for their expertise in law enforcement, which is why Nassau is one of the safest large suburban counties in America today. Keep up the good work Officers Curaba and Laundrie!”

Officer Curaba was on patrol in Merrick when he observed a subject who matched the description of the man wanted in the robberies, walking in the street. Officer Curaba approached the man to speak to him but the man fled and Officer Curaba pursued him on foot. Officers Curaba and Laundrie were able to tackle and arrest the defendant, who was in possession of a loaded Sccy 9mm gun wrapped in a sweatshirt.

Officer Laundrie recently graduated from the Police Academy and was on his first tour and Officer Curaba has been with the Nassau County Police Department for approximately a year.