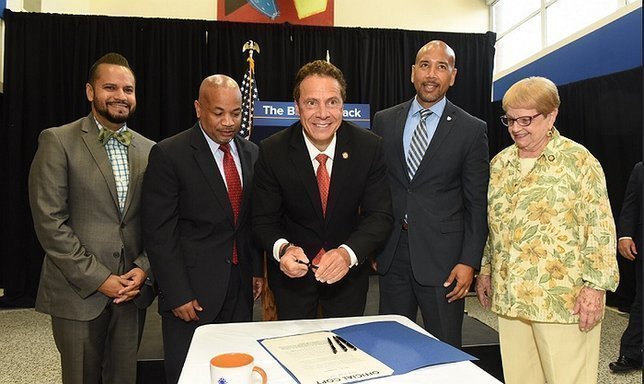 Albany, NY - June 16, 2017 - Governor Andrew M. Cuomo today announced that the New York State Board for Historic Preservation has recommended the addition of 22 properties, resources and districts to the State and National Registers of Historic Places. Additionally, in recognition of Pride Month, Governor Cuomo announced that the National Register listing for the Alice Austen House in Staten Island has been expanded to recognize the renowned photographer’s significance in LGBT history.
"This new historic designation of for the Alice Austen House is a recognition of the full scope of this trailblazer’s life and is a further recognition of this state’s place in the struggle for LBGT rights," Governor Cuomo said. "The rich history of New York helped shape the history of this nation and the designation of these 22 additional sites to will help ensure that these places and their histories are preserved for New Yorkers and visitors alike for generations to come."
State and National Registers listing can assist property owners in revitalizing buildings, making them eligible for various public preservation programs and services, such as matching state grants and state and federal historic rehabilitation tax credits. Since the Governor signed legislation to bolster the state’s use of rehabilitation tax credits in 2013, the state and federal program has spurred $3 billion of investment in historic commercial properties. In 2016, New York State led the nation in the number of completed projects using rehabilitation tax credit programs. $748 million in investments were generated by the state and federal credit to revitalize historic buildings throughout the state. More than two-thirds of the completed projects are in upstate communities.
Rose Harvey, Commissioner of the Office of Parks, Recreation and Historic Preservation said, "I congratulate the property owners for winning this notable distinction. It is an important step in embracing historic preservation as a tool to create jobs, promote tourism, expand housing and encourage private investment, all while preserving natural resources."
The State and National Registers are the official lists of buildings, structures, districts, landscapes, objects and sites significant in the history, architecture, archeology and culture of New York State and the nation. There are more than 120,000 historic buildings, structures and sites throughout the state listed on the National Register of Historic Places, individually or as components of historic districts. Property owners, municipalities and organizations from communities throughout the state sponsored the nominations.
Once the recommendations are approved by the state historic preservation officer, the properties are listed on the New York State Register of Historic Places and then nominated to the National Register of Historic Places, where they are reviewed and, once approved, entered on the National Register. More information and photos of the nominations are available on the Office of Parks, Recreation and Historic Preservation website.
Alice Austen House
Originally listed in 1970, the National Register listing for the 17th century Staten Island house where Austen lived did not reveal the full extent of Austen’s significance as an artist living an openly non-traditional life and how she dealt with gender and social norms in her photography. The expanded National Register listing details that between 1917 and 1945, Austen shared the house with her companion, Gertrude Tate, with whom she had an intimate, fifty-three-year, same-sex relationship. Austen was what has become known as a “New Woman,” breaking from contemporary societal strictures on feminine behavior. Austen and her friends were among many middle- and upper-class educated women of the late 19th century who did not feel that they needed a man to live a successful life. Austen’s non-traditional relationship with Tate and her exploration of gender and societal norms were illustrated in her photographs.
The designation of the Alice Austen House is part of the broader New York City LGBT Historic Sites Project, which is working to highlight LGBT history from the founding of New York City through the 20th Century. For more information about documented LGBT historic sites in NYC and to view the organization’s interactive map, please visit https://www.nyclgbtsites.org/. The project has been funded in part by grants received by the Office of Parks, Recreation and Historic Preservation from the Department of the Interior’s Underrepresented Communities Grant. To date, the project has received funding twice for awards of $49,999. The grant program is funded though the Interior’s Historic Preservation Fund and is designed to help increase the number of listings associated with communities that are underrepresented in the National Register of Historic Places.
Allegany Council House
At the request of the Seneca Nation, the State Review Board considered a proposal to nominate the Allegany Council House in the Seneca Nation Allegany Territory to the National Register. Although the board voted to support the nomination, the Seneca Nation has its own Tribal Preservation Officer and will submit the nomination directly to the Keeper of the Register.
The 1925 wood-frame building is significant for its associations with two major 20th century events in the cultural and governmental history of the Seneca Nation. The Allegany Council House served as the primary gathering place for regular meetings of the Seneca Council and was the political epicenter for two major Seneca Nation battles: to halt the Kinzua Dam Project and to obtain the right to vote for Seneca women in Seneca elections.
Capital Region
Central New York
Finger Lakes
Long Island
Mid-Hudson Valley
New York City
North Country
Southern Tier
Western New York