Long Island FunFest is The No. 1 Stop for Family Fun! 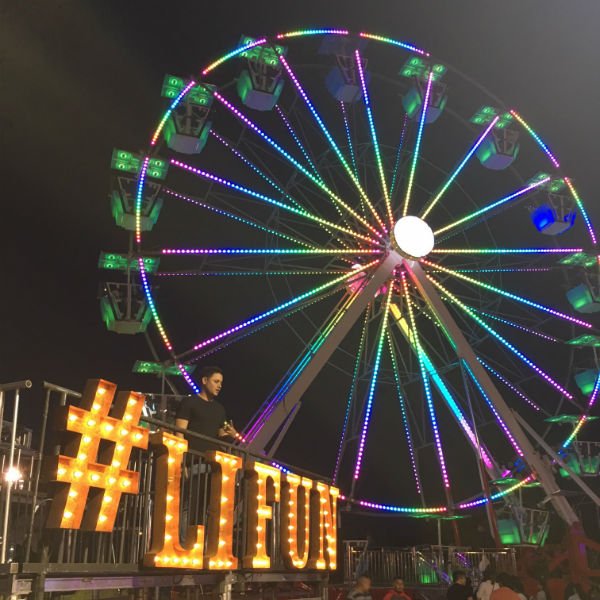 Brentwood, NY - June 16, 2016 - The First Annual Long Island FunFest is continuing its momentum this weekend with Midway attractions, events and other fun for the whole family through Sunday, June 19. FunFest, which is hosted by Dreamland Amusements, features Fireworks by Grucci, the World of Wonders Oddity Show, Live Music, the Commerford Petting Zoo, karaoke and the Victoria Thrill Show Circus.
In an ode to the giant traveling fairs of yesteryear, The World of Wonders Oddity Show, presented by Ward Hall, offers the traditional performance, with a modern flair. The show, which has been presented at the Smithsonian Institute in Washington, D.C., features sword swallowers, fire eaters, escape artists, snake charmers, and more! All acts are deemed family-friendly, with an educational element of an explanation of history that dates back centuries.
“America’s First Family of Fireworks,” Fireworks by Grucci will be lighting up the skies at 9:30 p.m. on Saturday, June 18. A crowd favorite for more than six generations, the Grucci fireworks presentation will feature some of the company’s best light show elements, which have earned it multiple designations in the Guinness Book of World Records.
Like the World of Wonders, Grucci combines modern technology with old-fashioned values. The company has had its hand in many signature performances, including the 200th Anniversary of the National Anthem and at seven consecutive U.S. Presidential Inaugurations, among other prominent events.
Several local and national bands will perform throughout the weekend, such as prominent classic rock tribute bands covering music from favorites such as the Beatles, Twisted Sister, Tom Petty, Stevie Ray Vaughan, KISS and the Allman Brothers Band. Guests can also enjoy performances in a variety of other family-friendly genres, including salsa band El Son de la loma, instrumentalist Ryan Formato, folk singer Dave Christian, rock band Chapter IV and Southern rock group Johnny Mac Band, as well as a dance performance from Tribal Dance Long Island. There will also be karaoke available on the mainstage throughout the festival.
As the largest summer festival in the region, FunFest will feature 28 carnival rides, including some of the most popular thrillers: Dream Wheel; Delusion – the only ride of its kind east of the Mississippi River; Dream Catcher and Zipper. For the faint of heart, they can visit the Firehouse, Orange Whip and Merry-Go-Round.
In addition to an array of games and craft vendors, FunFest will also be home to a wide variety of traditional fair food from local concessionaires, including grilled sausage and peppers, corn dogs, zeppoles and funnel cake, cotton candy, popcorn and other foods.
“Long Island FunFest offers great entertainment for families who want to take a moment to laugh and enjoy life together,” said Bob Destefano, Co-Owner, Dreamland Amusements. “Our schedule of events, first-class attractions and impeccable vendors are sure to make this an unforgettable experience for everyone who attends.”
The carnival will be open Thursday and Friday from 4 p.m. to 11 p.m. and Saturday and Sunday from noon to 11p.m.. General admission is $2 per person on Thursday and $5 per person Friday through Sunday. Wristbands are available for $25 on Thursday and $30 Friday to Sunday. On Saturday, June 18 unlimited rides are free with $5 general admission from 11:00 a.m. to 12:00 p.m.
The Long Island FunFest is located at the Suffolk County Community College Michael J. Grant Campus, located at Exit 53S off the Long Island Expressway (LIE). Take the LIE to Exit 53S to Wick’s Road. Use the Wick’s Road entrance to the Long Island FunFest.
For more information, please visit FunFest's event page. For a complete schedule of acts as well as admission information and ride and concession coupons, visit LongIslandFunFest.com. For more information regarding Dreamland Amusements, visit dreamlandamusements.com.
About Long Island FunFest
Long Island FunFest was created by Bob Destefano, co-owner of Dreamland Amusements. Mr. Destefano brings over 30 years of experience in producing events nationwide.