Legendary member of the Doors, John Densmore, will be Tom Needham’s exclusive guest this Thursday at 6 P.M. on WUSB’s The Sounds of Film.

Stony Brook, NY - June 15, 2017 – The Doors’ John Densmore will join Tom Needham on The Sounds of Film in order to discuss his participation in the film Chasing Trane: The John Coltrane Documentary.
Rock and Roll Hall of Fame inductee, John Densmore, is an accomplished musician, songwriter, writer and actor. He is the original and only drummer for the Doors, who are known for their hits “Light My Fire,” “Break on Through,” “Touch Me,” “People Are Strange,” and “L.A. Woman.” Densmore is the best-selling author of Riders on the Storm and The Doors Unhinged: Jim Morrison’s Legacy Goes Up on Trial. He is currently working on his third book, Meetings with Remarkable Musicians.  He is currently featured in the movie, Chasing Trane: The John Coltrane Documentary. 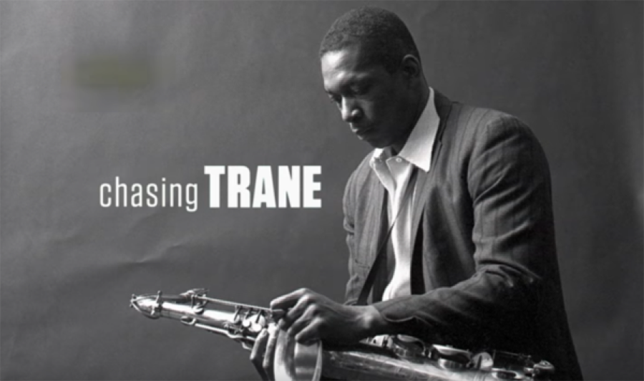 Chasing Trane: The John Coltrane Documentary. Photo Credit: The Sounds of Film
Chasing Coltrane: The John Coltrane Documentary, directed by John Scheinfeld, explores the music and life of John Coltrane, who called Long Island his home. The movie, featuring President Bill Clinton, Carlos Santana, Cornel West, and John Densmore, explores Coltrane’s masterpiece, “A Love Supreme,” which was composed in Coltrane’s Dix Hills Home. The film, narrated by Denzel Washington, recently screened at the Cinema Arts Centre in Huntington.
About the Sounds of Film
The Sounds of Film is the nation’s longest running film-themed radio show. For the past 30 years, the program has delivered a popular mix of interviews and music to listeners all over Long Island, parts of Connecticut and streaming live on the internet.  Previous guests include Cornel West, Jimmy Webb, Billy Joel, Igudesman and Joo, Chuck D., members of Yo-Yo Ma’s the Silkroad Ensemble, Michael Moore, Jim Messina and Carter Burwell.