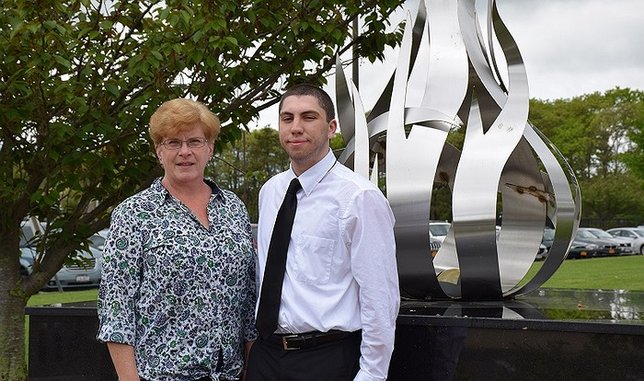 Steven’s ultimate goal is to garner acceptance into West Point after graduation. He plans to major in civil and/or mechanical engineering in college.

“I believe the Academy is an excellent way to serve both my nation and myself,” said Steven. “It allows me to advance my academic studies as well as my abilities as a leader. My education there will give me the best skill set possible to provide for myself and give back to the country in the most effective way possible.”

Steven has been inspired by his uncle, U.S. Marine Corps Sergeant Garett A. Mongrella, who was killed in action during Operation Desert Storm in January of 1991. “I have always seen him as a role model for his devotion to our nation and the sacrifice he made,” said Steven. “I’ve always dreamed of serving in his place, and that dream has influenced how I have grown. We miss him dearly, but we could not be more proud of him and the freedom he stood for.”

“Steven is amazing,” said Nancy DeVito, Steven’s guidance counselor. “Not only has he achieved superior academic success, he is self-motivated, a consummate time manager and a leader in a variety of areas. I believe he is the ideal candidate for a military academy.”

In addition to his stellar academic record, Steven is involved in a variety of extracurricular activities including playing the French horn in the Wind Symphony, serving as the vice president of the high school’s Key Club as well as sitting on the division board for eastern Long Island. He is also a member of the National Honor Society and the Youth and Government Club, and volunteers with the Col. Francis S. Gabreski Squadron of the Civil Air Patrol, the civilian auxiliary of the United States Air Force.