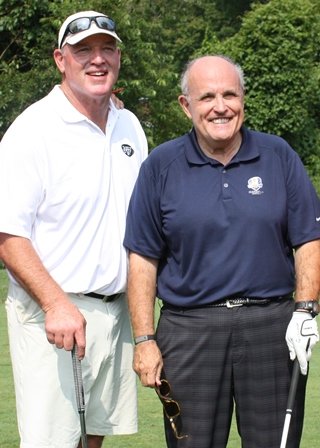 Old Westbury, NY - June 15, 2015 - Rudolph Giuliani will be the recipient of the “Lifetime Achievement” award at the 30th Annual Celebrity Golf Classic hosted by The Marty Lyons Foundation (MLF) on Monday, July 13, 2015 at the Old Westbury Country Club in Old Westbury, NY.  The Marty Lyons Foundation was created by Marty Lyons, a former NFL defensive lineman for the New York Jets and member of the legendary “New York Sack Exchange,” and a dedicated group of volunteers.  The Foundation grants wishes to children between the ages of three and 17 who have terminal or life-threatening illnesses and is unique in that it considers granting a second wish to a deserving child.

Mr. Giuliani has held a number of governmental positions during his career, including United States Attorney for the Southern District of New York, and is most remembered for his leadership and resolve during and after the terrorist attacks that hit New York City on September 11, 2001.

He was named the “Person of the Year” for 2001 by Time magazine and was given an honorary knighthood by Her Majesty Queen Elizabeth II in 2002 in recognition of his ability to bring not only New York City together during a time of unspeakable sorrow and terror, but also many people around the world.

Mr. Giuliani met Mr. Lyons in the mid-1980s and has been a generous supporter of The Marty Lyons Foundation ever since. “The Mayor has done so much for the people of New York, and so much for me personally. I’m blessed and honored to call him my friend.  I am proud to have the opportunity to present this special award to Mayor Giuliani,” said Mr. Lyons