The establishment, owned by father and daughter Tony and Jaime Liedtke, recently underwent an extensive remodeling and renovation process. 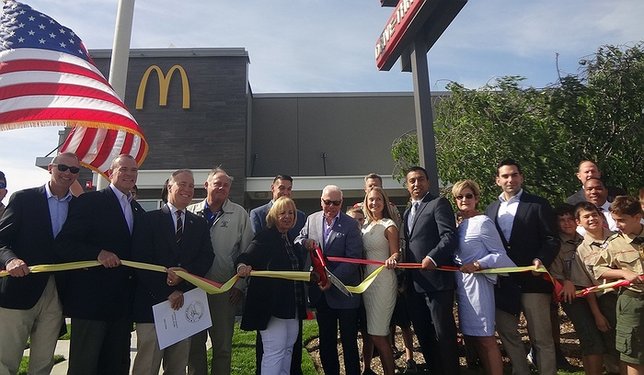 Bright and early on the morning of Saturday, June 8, the McDonald’s in Oakdale, NY held a festive ribbon-cutting ceremony to celebrate their recent Grand Re-Opening after an extensive four-month renovation. The event was a gala affair, with local politicians and dignitaries attending a U.S. flag-flying ceremony conducted by local Boy Scout Troop 205 and celebrating the restaurant's many contributions to the community over the years.
The establishment, owned by father and daughter Tony and Jaime Liedtke, recently underwent an extensive remodeling and renovation process. Taking four months, the store was given a fresh and modern coat of paint, with a clean, bright design aesthetic and the latest in cutting-edge technology, including digital menu signs behind the counter as well as touchscreen order kiosks in the lobby where customers can place their own individualized orders with the mere touch of a finger. However, if technology isn’t your thing, never fear...the counter is still just a few steps away with a real, live person who can take your order instead. 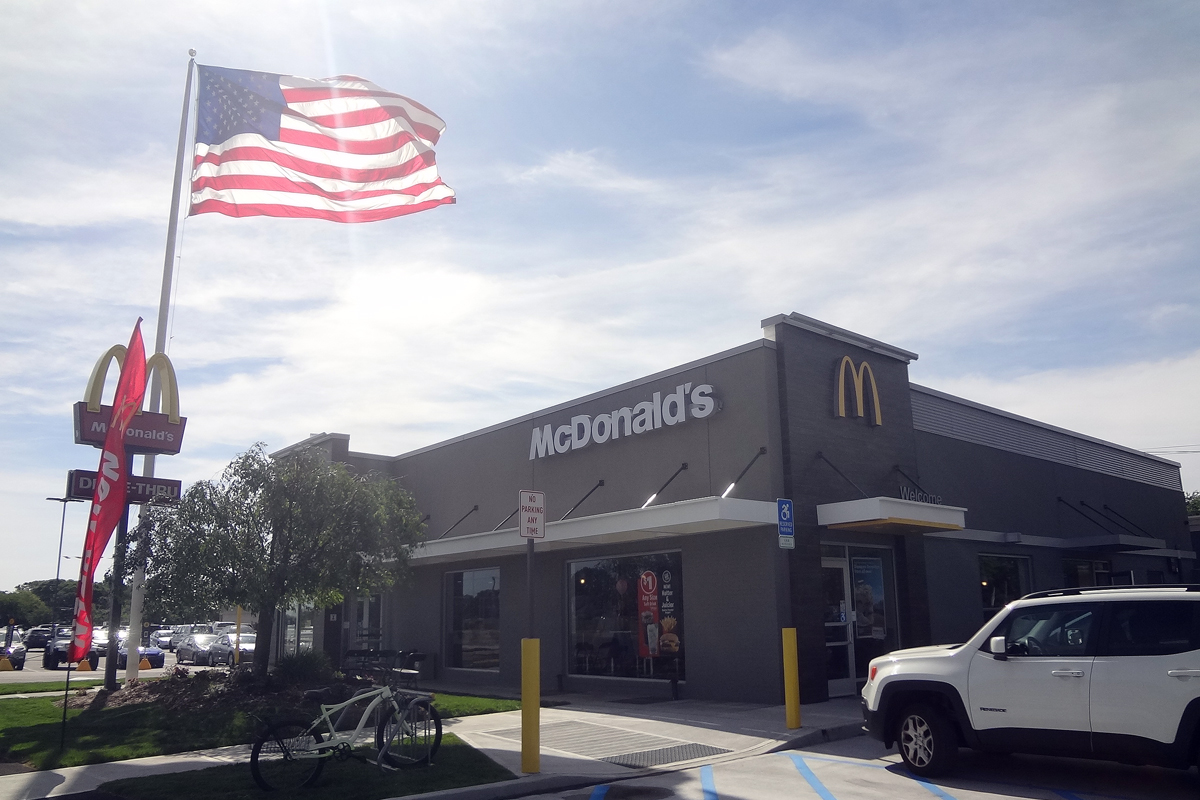 The McDonald’s in Oakdale was given a fresh and modern coat of paint, with a clean, bright design aesthetic and the latest in cutting-edge technology. Photo Credit: Chris Boyle
Counter-to-table delivery service is now also available, and the drive-through remains open 24 hours a day as before.
“We reopened April 8th after four months of construction. The store was fine before, but had an old look and it needed to be reinvigorated,” Tony Liedtke said. “The local community has been super-receptive…the results have just been overwhelming. Normally when you close for four months people find another place to go, but we don't appear to have lost a single customer, and actually we only lost one crew member, which is unheard of. We try to get our employees hours in other stores, but we only lost one person out of 60, which is remarkable.”
Liedtke and his family own nine McDonald's locations, with the Oakdale restaurant being restaurant number seven; he and his daughter purchased the establishment together in 2007. 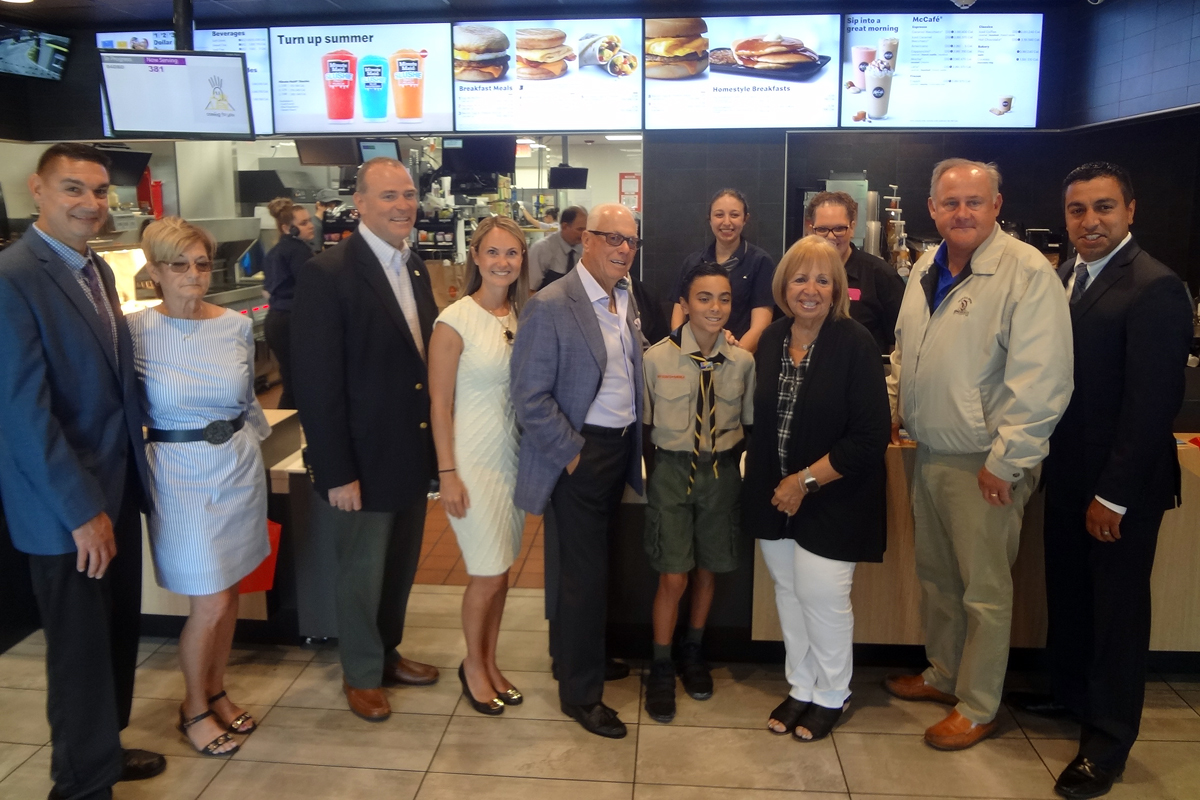 Restaurant co-owners, father and daughter Tony and Jaime Liedtke, pose with with local politicians and dignitaries. Photo Credit: Chris Boyle
Liedtke said that he got involved as a McDonald's franchisee as a returning veteran from Vietnam. After attending college and earning a business degree, he said that he was looking for an opportunity that would allow him to use the things he had learned in the military; something with a goal and outlined parameters, and McDonald's presented that exact opportunity to him.
"I just happened to find McDonald’s at the right time and the right place," he said. "I worked with Pete Hunt, who mentored me and helped me become an Owner/Operator in 1987, and then I started my own company in 2002 with my wife Mary, my daughter Jaime, Mitch Merida, and Gary Farrell, and that’s what brought us here today."
The ribbon-cutting was attended by many local dignitaries, including Islip Town Supervisor Angie Carpenter, Suffolk County Legislator Tom Cilmi, a representative from Assemblyman Andrew Garbarino's office, Assemblyman Steve Stern, Councilman John Cochrane Jr., Phyllis Brown representing Councilwoman Mary Kate Mullen, and Councilman James O’Connor. 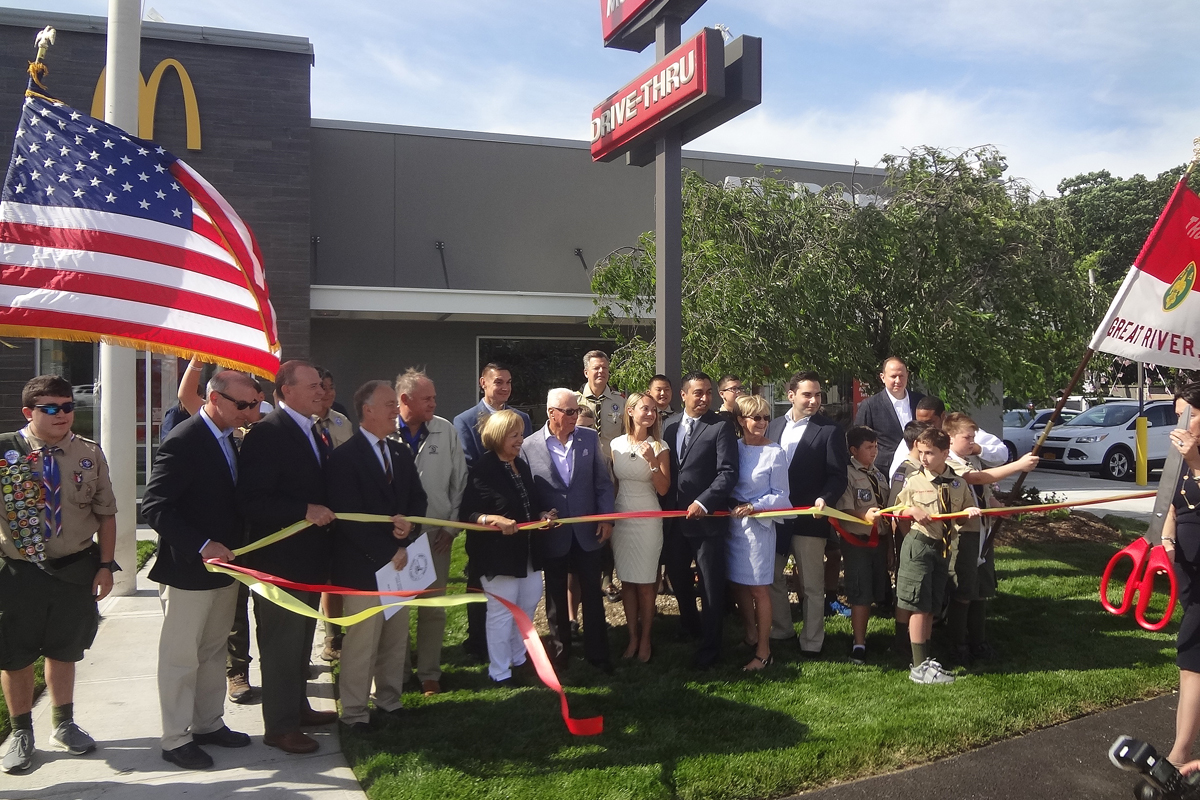 The McDonald’s in Oakdale, NY held a festive ribbon-cutting ceremony to celebrate their recent Grant Re-Opening after an extensive four-month renovation. Photo Credit: Chris Boyle
Islip Town Supervisor Angie Carpenter noted that she was very happy that Liedtke had chosen to show his confidence in the business community in the town of Islip.
“I know he has more than one store in the town of Islip, and we just want to thank you for being here and creating an atmosphere where families will come and create memories that will last a lifetime,” she said. “Every time you pass this McDonald's and see that 350 square foot American flag out front flying, you can take an extra sense of pride about what it all means.” 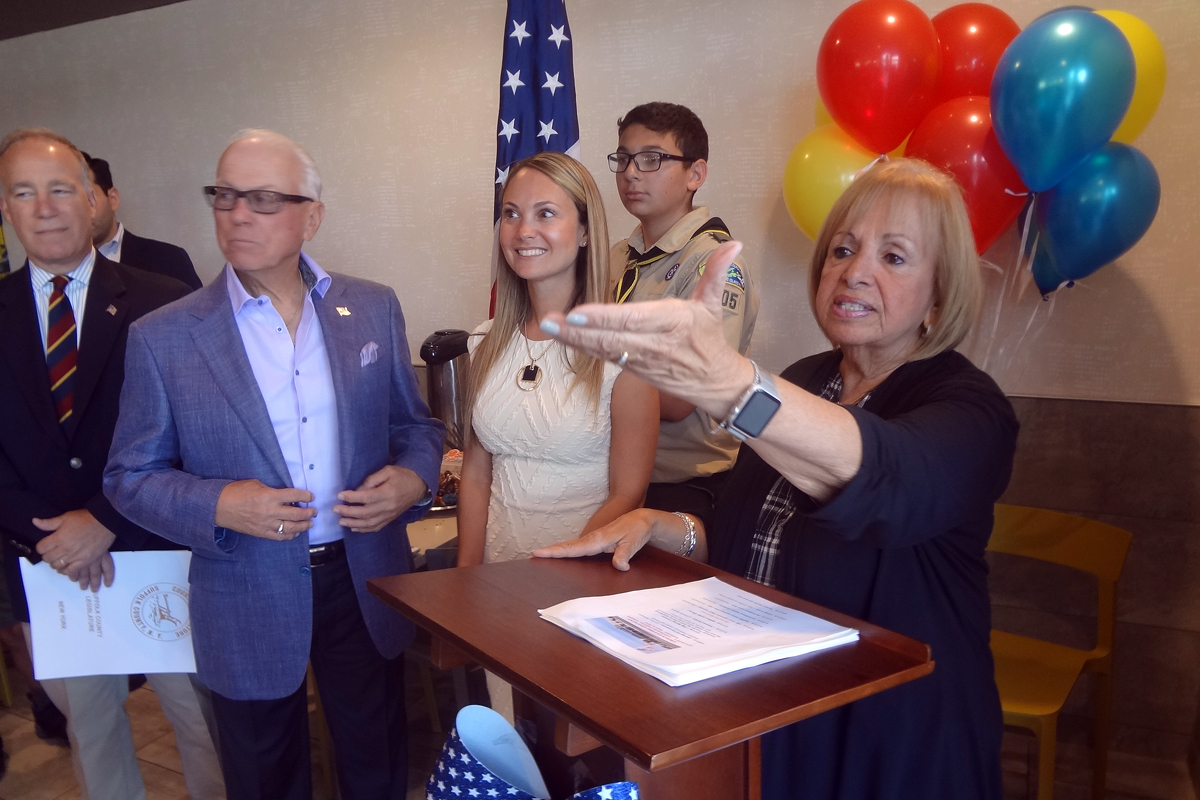 Islip Town Supervisor Angie Carpenter (right) noted that she was very happy that Liedtke had chosen to show his confidence in the business community in the town of Islip. Photo Credit: Chris Boyle
Assemblyman Steve Stern found himself a little bit out of his district that morning, normally representing his constituents in Huntington. However, having grown up in the Oakdale neighborhood, he said that this particular McDonald's location was an important part of his life for many years.
“Not too long ago, Tony and Jamie gave me the privilege of allowing me to make my very own Big Mac for the first time with his staff at their Huntington location, and that was a really, really wonderful experience,” he said. “But even more importantly, I grew up just a few blocks from here, and this was my very first Hometown McDonald’s, so this is a very special day for me to be here and say congratulations and thank you for a lot of memorable early morning and late night meal runs, and for all the wonderful things that you do for our community.” 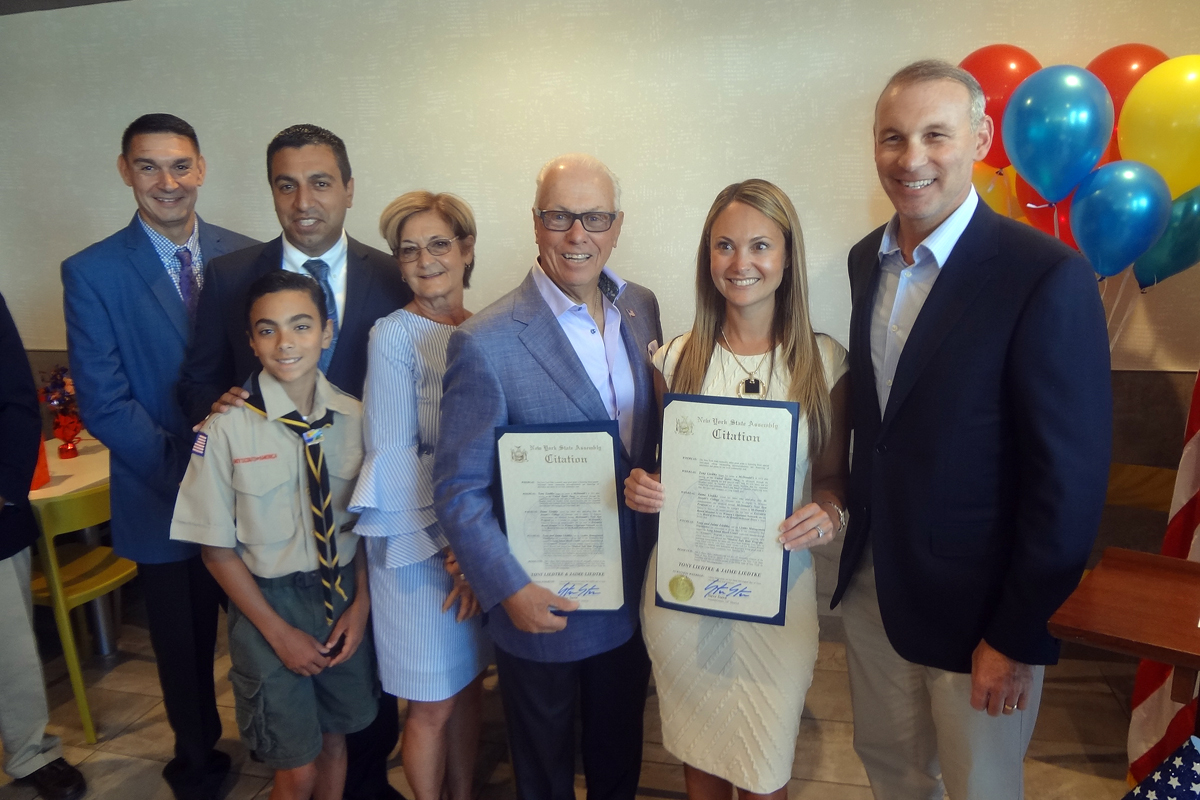 Assemblyman Steve Stern (right), having grown up in the Oakdale neighborhood, presented a cirtificate of merit to the Liedtke family. Photo Credit: Chris Boyle
Liedtke noted that an important part of being a businessman is to establish a strong and unbreakable bond with the communities that he serves; to that end, undertaking a number of charitable endeavors throughout his career has been a regular part of business since day one.
“We work with many local schools, community groups, and the Town of Islip. For example, for their help here with the flag-raising today, we’re going to be donating $1,000 to the general fund of Troop 205…we’re going to be presenting the check to them next week,” he said. “Also, the Town of Islip is a great place to run a business. There are so many local towns and villages that make it difficult, and all we're trying to do is the right thing for our communities. But the Town of Islip was very helpful in putting the store together, and if there was anything we needed they helped us get it done. We probably saved at least a month of construction time with their help on the redesign here.” 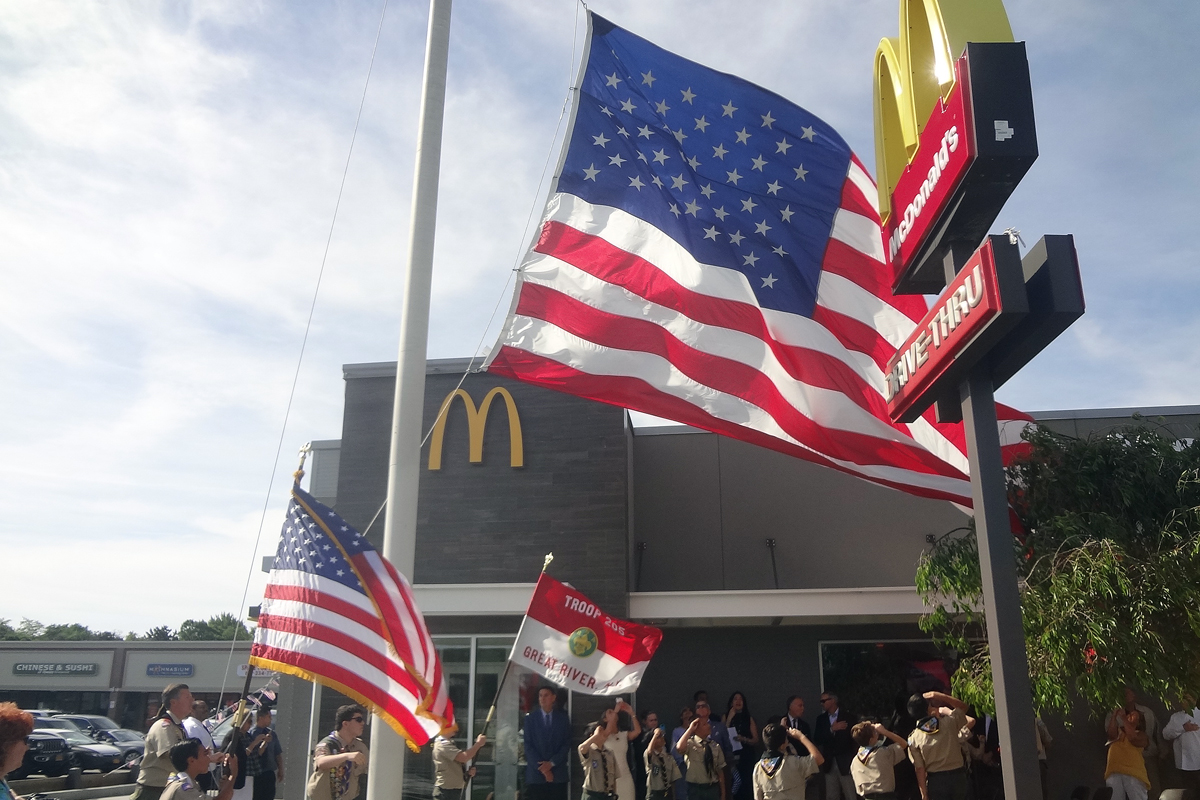 A U.S. flag-flying ceremony conducted by local Boy Scout Troop 205. Photo Credit: Chris Boyle
The fact that his endeavor as a McDonald's franchisee has encompassed his entire family makes it a joy every single day that he gets out of bed to go to work, Liedtke said.
“On days like this, it feels fabulous, especially with my grandson, who is in Troop 205, holding the flag this morning,” he said. “We have my daughter and her husband, my wife and I, and Gary Farrell, who's the Director of Operations and a partner in the business who I've known for 30 years...it feels great.”