Sparkling devices, which include “sparklers”, cause a large percentage of firework injuries, Nassau officials say. 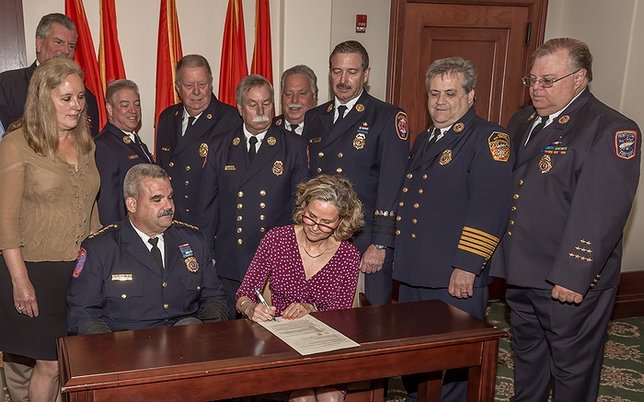 Mineola, NY - June 13, 2018 - Nassau County Executive Laura Curran today joined with Legislator Delia DeRiggi-Whitton (D - Glen Cove) to sign Legislation that will immediately prohibit the sale and use of dangerous sparkling devices in Nassau County.
“After conferring with our Fire Marshal, volunteer firemen and my colleagues in the legislature, I have decided that Nassau County will “Opt Out” of New York State Legislation that currently exempts sparkling devices from the definition of fireworks and dangerous fireworks, said County Executive Curran.
Sparkling devices, which include “sparklers”, cause a large percentage of firework injuries and are responsible for the majority of firework injuries suffered by children. The legislation was recently passed unanimously by the Legislature.
“We have always thought of sparklers to be harmless,” said County Executive Curran. “But sparklers are indeed dangerous--burning as hot as 2,000 degrees. That’s as hot as a blow torch.”
“The signing of Opt Out Fireworks legislation by County Executive Curran provides a great deal of safety for our public,” said Chief Fire Marshal of the Nassau County Fire Commission Scott Tusa. “This legislation not only prohibits the retail sale or use of ‘sparklers’, but also prohibits fountains and pyrotechnic display cakes. Annually, there are far too many injuries caused by fireworks and many of these injuries are to children.  I thank Nassau County Executive Laura Curran and the Nassau County Legislature for their actions in choosing to Opt Out of Fireworks.”
“When our first responders explained the risks associated with sparkling devices – especially to Nassau County’s youngest residents – it became clear that banning their sale in Nassau County was the right thing to do,” Legislator DeRiggi-Whitton said. “I am grateful that Nassau County’s first responders informed us of this hazard and applaud the Legislature and County Executive Curran for acting quickly to protect our children.”
Data from the U. S. Consumer Product Safety Commission suggests that fireworks were involved in an estimated 10,500 emergency room visits treated in 2014. Children 5 to 9 years of age had the highest rate of fireworks-related injuries. And more than 1,400 emergency department-treated injuries were caused by sparklers.
These figures are magnified when you consider that sparklers are only available a few days a year: July 1 to July 5 and from Dec. 26 to Jan. 1.
Despite the possible tax revenue generated from the sale of these dangerous items, it is not worth serious injury--especially to our children,” said County Executive Curran. “That is responsible, ethical government.”