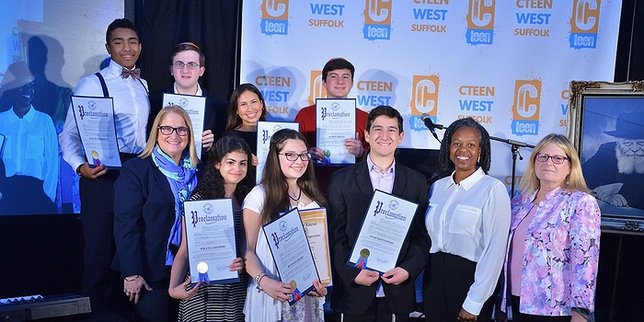 Dix Hills, NY - June 12, 2018 - Last week seven Long Island teens were honored at the Annual CTeen West Suffolk Dinner at The Chai Center in Dix Hills, NY, for their work and dedication to this vital youth community service organization.
Sarah Strent of Commack received the Leadership Award; Mikayla Shapiro of Commack and Justin Mintz of Plainview received the Rookies of the Year Awards; Noah Rosenzweig of East Northport and Justin Winawer of Plainview received the Chesed (Kindness) Awards; Beth Goldberg of West Babylon received the Dedication Award; and Elijah Morrison of Melville was named Teen of the Year. The hosts for the evening were CTeen West Suffolk teen leaders, Carly Tamer and Hannah Sharifian, both of East Northport, NY.
Town of Huntington Supervisor Chad Lupinacci; Suffolk County Legislator Susan Berland; Carol Nuzzi representing Senator John Flanagan; and Councilwoman Jacqueline Gordon of the Town of Babylon all attended to personally congratulate the teens. Warm greetings and certificates were also sent from Governor Cuomo, Senator Gillibrand, and Senator Schumer.
Among this year's activities, CTeen West Suffolk teens cooked for needy families, held a toy drive, packed holiday gifts for ill children, enjoyed a paint night with seniors at an assisted living facility, listened to the life stories of Holocaust survivors and attended three major conventions; a regional, national and international Shabbaton, where they represented Long Island.
It was an inspiring and moving night commented Rabbi Dovid Weinbaum, the director of CTeen West Suffolk, which is based at The Chai Center. However, he explained, this is just the beginning. “We need to reach every Jewish teen and let them know they have a home at CTeen West Suffolk.”
Sarah Strent, who was named the Leader of the Year, told the crowd, “One very significant message I took away from this year of CTeen is that everyone is a leader. You don’t need a title or a sweatshirt to prove that. I firmly believe every single one of you is capable of achieving anything you set out to do.”
With over 200 chapters globally and tens of thousands of members, CTeen, the fastest growing Jewish teen network in the world, inspires and facilitates teens who want to give back to their community and environment, with an emphasis on positive character development. The CTeen Network believes in the power of youth and transforming the teen years into a time of purpose and self-discovery. The goal is to turn youth into leaders. Under the direction of Rabbi Dovid Weinbaum of The Chai Center, the CTeen West Suffolk chapter has tripled in size to more than 60 members since its launch just four years ago.