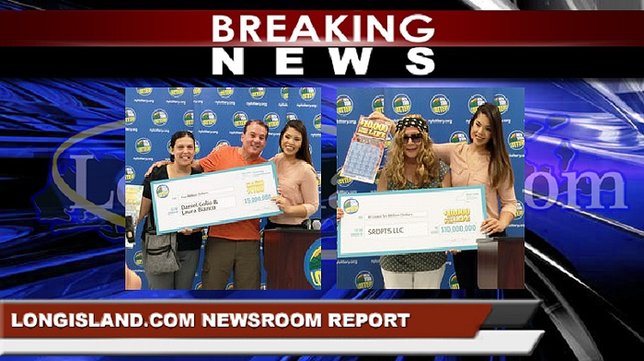 Central Islip Powerball Player Takes Advantage of New York Lottery’s ‘Play it Again’ Feature to win $1M
Michael Pozzi of Central Islip is $1,000,000 richer thanks to the New York Lottery’s Draw Game feature called Play it Again. The feature allows Lottery players to purchase an exact duplicate of a ticket they purchased within the last 30 days. Pozzi chose to use the feature because he liked the set of numbers on a Quick Pick Powerball ticket he previously purchased.

The strategy paid off for Pozzi when he bought his Powerball ticket for the April 30 drawing on his way home from a trip to Costco. Pozzi’s Play it Again ticket matched the first five numbers drawn that night making the 50-year-old $1,000,000 richer.

“I scanned my ticket the day after the drawing and the terminal said big winner,” explained Pozzi. “I scanned it again to be sure and then went straight home to check my computer. When it finally hit me that I matched five numbers I thought ‘Oh my God, it’s $1,000,000!’”

Pozzi purchased his winning ticket at the 7-Eleven on Motor Parkway in Brentwood. The $1,000,000 second prize on Powerball is paid as one-time lump sum payment. Pozzi will receive a net check totaling $661,800 after required withholdings.

Pozzi’s plans for his winnings include paying off some bills and making safe investments for the future.

“Play it Again was introduced in December 2012 and lottery players love this feature to play favorite numbers or numbers they feel are lucky. Just last week over 963,000 tickets in New York were played again across the 17,500+ retailers across the State. It is quick and easy for both the retailer and the lottery player to play the same numbers for the next available drawing of the associated game,” said Gardner Gurney, Director of the New York Lottery.

NYC Man in Florida Wins $5,000,000 Scratch-off Prize During Routine Visit to the Big Apple
Daniel Golio from Hudson, Florida (formerly of New York City) routinely travels to New York for business and likes to try his luck on scratch-off tickets while back in the Big Apple. During a recent trip in April, Golio purchased a CASH X100 ticket and won the $5,000,000 top prize.

“I liked the look of this ticket so that’s the one I went with,” explained Golio. “I always buy my tickets at Bravo’s because I like their coffee.”

Golio purchased his multi-million dollar winner at the Bravo Coffee & Deli on 187th Avenue in the Bronx. “I scratched the ticket right there in the store and couldn’t believe my eyes. I must have read it over 27 times it was so unbelievable!”

“This is all so unbelievable,” said Golio. “I’ll use these winnings to invest in my current businesses and then see what the future holds.”

Massapequa Retired Teacher Reinvests Lottery Winnings and Wins $10,000 a Week for Life
Betty Leong from Massapequa used a reinvestment strategy while playing Lottery scratch-off tickets and hit the win of a lifetime. After reinvesting smaller prizes on various tickets, Leong hit the jackpot on a $10,000 a Week for Life ticket earning the retired teacher a multi-million dollar payday.

“I went to the card shop to cash in a $5 winner and bought another ticket with the winnings. I won another $5 and used that to buy a second ticket which was a $10 winner. That $10 winner turned into a $100 winner,” explained Leong.

“It was a purely random choice,” she said about picking her jackpot winning ticket. “I never played it before. I just wanted to splurge.”

Leong purchased her ticket at LR Cards & Gifts on Merrick Road in Massapequa. Leong chose the lump sum payment option and claimed her prize in the form of the SRDPTS, LLC. The SRDPTS, LLC will receive a one-time lump sum totaling $5,181,301 after required withholdings.

Leong does not have any concrete plans for the money other than continuing renovations on her home. “I’ve been working on my house ever since I retired,” she said. “Maybe now we can just move!”

The New York Lottery contributed $245,288,826 in Lottery Aid To Education to school districts throughout Suffolk County during fiscal year 2015-2016.