Central Park Carriage Horse Takes a Loop around the Park with No Driver, Damages Taxi Door

A carriage horse at Central Park decided to make a run around the park by itself with no driver or any passengers on Monday. 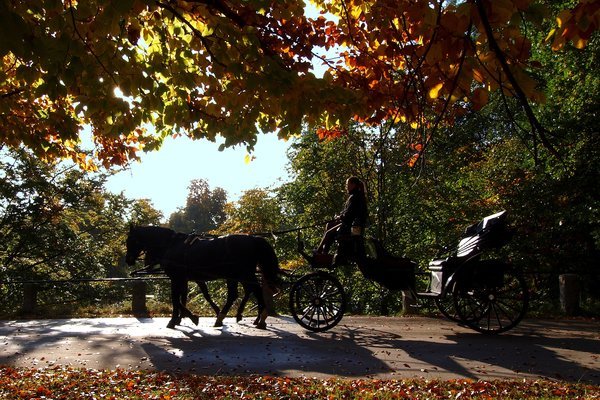 Around 5:45 p.m. on Monday, a 7-year-old horse named Pumpkin ran Central Park pulling a carriage without a driver or any passengers. The incident occurred when the horse became detached from its bridle. Fortunately, there were no injuries other than a taxi vehicle’s door getting damaged.

Pumpkin ran the usual route it takes at 59th Street and Fifth Avenue and looped back when its carriage hit a taxi’s open door.

Pumpkin had slowed down towards the end of the run, but when a bicyclist  ended up jumping in the driver’s seat trying to stop Pumpkin, it only cause Pumpkin to speed up and hit the taxi on Central Park South.

The carriage operator Christina Hansen was unable to stop Pumpkin from making the run once the bridle was off, according to reporting from NBC New York. A group of carriage drivers waited to corral Pumpkin upon return.

Pumpkin was unharmed and was taken back to the stable.

While this latest incident caused no harm to horse or person(s), it draws up discussion again between supporters and opponents on whether horse-drawn carriages belong on New York City streets.

New York City Mayor Bill de Blasio has vowed to end horse-drawn carriages in Central Park when he was elected. Mayor de Blasio would like to replace them with vintage-looking electric cars.