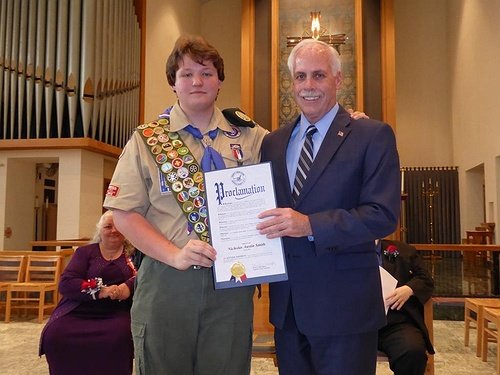 Lindenhurst, NY - June 9, 2015 - Suffolk County Legislator Kevin McCaffrey (R-Lindenhurst) recently participated in the Eagle Court of Honor for Lindenhurst’s Nicholas Austin Smith.  The Court of Honor took place at St. Peter’s by the Sea Episcopal Church, and was widely attended by elected officials, civic leaders, in addition to the friends and family of Nicholas.

The journey to the rank of Eagle Scout is not an easy one, as it not only requires years of dedication, but real-world application of the knowledge attained through scouting.  This ultimately serves as training for the Eagle Scout candidate’s community service project, which must be substantial and have a lasting impact.  Once the candidate chooses his project, he must orchestrate the entire process from its start to completion.  This often involves coordinating with public and private entities, raising needed funds, and managing the operations.

For his service project, Nicholas chose to organize a local blood drive in collaboration with the New York Blood Center.  The drive was a resounding success, with a total of thirty-eight pints of blood being donated.  This project will no doubt save countless lives and serve as an inspiration for not only future Eagle Scouts, but the community at large.

“I can’t express enough thanks to Nicholas’s contribution to the community, and for being a true role model for his peers,” said McCaffrey.  “Now that he has joined the ranks of the Eagle Scout family, I have every confidence that it marks only the beginning of a life committed to service.  I wish Nicholas the best of health, luck, and happiness in all the years to come.”