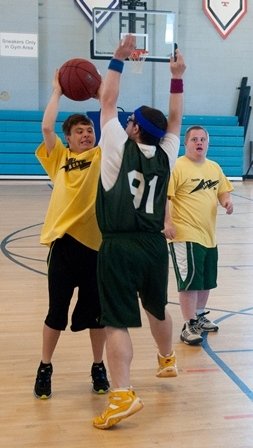 Hicksville, NY - June 8, 2015 - The Nassau County Police Activity League (NCPAL) Special Needs Unit recently hosted approximately 150 athletes with special needs as part of the 2015 Special Olympics New York Basketball Tournament at the Town of Oyster Bay Hicksville Athletic Center. The day-long tournament saw a total of 16 basketball teams participate, up from 13 in 2014. Due to the increased number of teams, games were spread out over two sessions – morning and afternoon. The tournament concluded with players receiving medals and award ribbons.

The morning’s opening ceremony began with NCPAL Special Needs Unit athletes carrying banners as part of the parade of teams and Michael Korins, a vocalist diagnosed with autism at age 3, singing the Star Spangled Banner and the Canadian National Anthem. Also participating in the opening ceremony was the Nassau County Police Explorer Color Guard.

The games opened after the athletes recited the Special Olympics Creed: “Let me win, but if I cannot win, let me be brave in the attempt.”  This was the seventh time Nassau County PAL participated in the Long Island Region of Special Olympics New York basketball program and the fifth time it has hosted the tournament.

The teams participating in the tournament included the Special Needs Unit Knights; New Hyde Park Knights; SCO Owls; Commack Sharks; Long Island Lions; ACDS Thunderbolts; AHRC Starz; and Oakville Skywalkers, a Canadian team that also took part in the 2014 tournament and returned this year in tribute of their late Coach, Stu Thomas A team from Albany, the Springbrook Thunderbolts, made their way to the tournament for the first time. Athletes ranged from age 12 to mid-to-late-40s.

“We look forward to this event each year and are excited over its continued growth and participation. The Special Olympics New York Basketball Tournament presents a fun-filled forum that fosters important fundamentals of socialization, sportsmanship and teamwork for children with special needs,” said Harvey Pollack, NCPAL Trustee Special Needs Unit.

Special Olympics New York Regional Director Diane Colonna commented, “This tournament gives participants a place where they can be treated equal among their peers while focusing on their abilities, not their disability.”

Tim Flynn, director of programs at Special Olympics New York, said, “When you see the athletes on the court during the tournament, it is no longer about what these children with special needs cannot do, but rather what they can do.”

The Special Needs Unit of Nassau County Police Activity League serves children ages 5 and up with varying disabilities. Sport, recreation and socialization activities are beneficial for children with special needs who have difficulty fitting into typical sports programs. Its primary goal is to develop physical, mental and social skills to help children with special needs gain confidence and self-esteem for reaching their maximum potential.

For volunteer opportunities or to learn more about NCPAL programs for boys and girls, click here.

Nassau County Police Activity League (NCPAL), founded in 1940, is a tax-exempt, not-for-profit organization that operates twenty-nine (29) local units, which cover over forty (40) different communities in Nassau County.  An executive board, a board of trustees and hundreds of volunteers carry out the organization’s mission each day. The NCPAL mission is to prevent juvenile delinquency and steer children clear of gang activity, and to aid in the positive interaction of Police Officers and youth. The Nassau County Police Department provides officers to oversee these units and to interact with the youths of these communities. Activities that are offered include sports, crafts, educational, and other programs. These activities vary from unit to unit and are based on the local community needs and interests.  For more information about NCPAL, visit Nassau County PAL Headquarters Activities Facebook page or click here.