The Yanks lost to Seattle last night, but have had an otherwise strong week. The Mets had two straight games rained out. 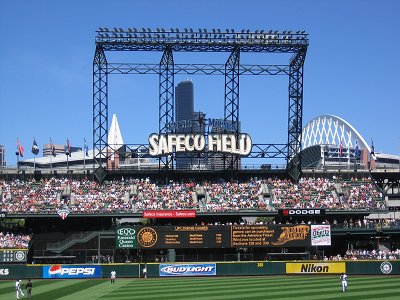 Between series with their crosstown rivals and their greatest intra-divisional enemies, the Yankees had already lost 4 of 5 games in the start of an 8-game home stand before the Indians came to town. They recovered from their most recent loss at the hands of the Red Sox and Mother Nature, however, with a 7-4 win over Cleveland on Monday.

Tuesday’s matchup began just as strongly for the Yanks as they took a commanding lead in the third inning. Following an RBI single off the bat of Ichiro Suzuki, Mark Teixeira blasted his second homer of the season, driving in Ichiro and Jayson Nix in the process. That spread stayed put until the seventh inning, when Joba Chamberlain replaced David Phelps and gave up a 3-run homer; Boone Logan came on to strike out the last batter after the lead was cut to 4-3. David Robertson did his job in the eighth, and Mariano River retired three straight in the ninth to earn his 21st save and keep Phelps’ 4th win intact.

CC Sabathia took the mound before the Indians left town on Wednesday, and got plenty of run support in the early going. Travis Hafner homered in the bottom of the first, taking Robinson Cano home with him to put the Yanks up 2-0. Chris Stewart’s RBI single in the second added to that lead, and Bret Gardner made it 6-0 with a homerun in the same inning. Sabathia allowed Cleveland to score two runs in both the sixth and the seventh, but he regained his composure and held on to go the distance, pitching 9 complete innings as the Bronx Bombers won 6-4 and evened out their home stand in the process.

6 was an important number once more when the Yanks traveled out to Seattle on Thursday night. Cano slammed in a 3-run homer to put New York on the scoreboard, and Teixeira went back-to-back with a solo shot immediately afterward. Vernon Wells drove in another run with an RBI single, as did Suzuki to cap off seven-straight hits for the team. Up 6-0, the team was well positioned to help Phil Hughes earn his third win of the season. The bullpen did allow a run after Hughes left in the eighth inning, but that was all the offense the Mariners found as the Yanks won 6-1.

New York scored even earlier in Friday’s game when Hafner’s groundout in the first inning allowed Gardner to score from third and put New York up 1-0. They threatened again in the second with runners on 1st and 2nd and no outs, but Wells was picked off in no man’s land as he anticipated a bunt from Reid Brignac. Brignac proceeded to strike out, and Chris Stewart flied out to end the inning.

The 1-0 lead remained until the bottom of the fourth. After retiring the first two batters of the inning, Hiroki Kuroda gave up a ground-rule double followed by two walks to load the bases. Four runners would score before Kuroda could get out of the inning, putting Seattle up 4-1. That score held steady for the rest of the night, snapping the Yankees’ 4-game winning streak.

Presently 2 games behind the Red Sox, the Yanks will play the Mariners again at 4:10 PM today and finish the series at the same time tomorrow.

The Mets caught some unexpected rest this week when rain brought a short end to their series in Washington and delayed the start of another series with the Marlins, but before the Northeast was pelted by inclement weather they played a pair of games against the Nationals.

In Game 1 on Tuesday the Nats took an early lead with a homerun off of Jeremy Hefner in the bottom of the second. The Mets’ starter buckled down, however, allowing the team to take a 2-1 lead in the fifth when an Omar Quintanilla triple scored Jordany Valdespin and Rick Ankiel. Hefner kept that score stable until he was replaced in the eighth inning, which Brandon Lyon worked through without incident. Unfortunately, Bobby Parnell could not retire a single batter in the ninth until it was much too late, allowing four runners to reach and the winning run to score on a sacrifice fly. Washington defeated New York 3-2 by virtue of the late-game rally.

The Nationals got out to an early lead once again on Wednesday when an Ian Desmond single in the bottom of the first scored the first run of the game. Once again the Mets reversed the lead quickly, this time on a 2-run homer from Marlon Byrd in the second, but they would not allow a two run rally in the ninth to take the game away from them again.

David Wright knocked in a 2-run homerun in the third, followed quickly by a solo shot for Marlon Byrd which put Washington down 5-1. An Anthony Recker single in the fifth drove home Daniel Murphy and Wright, increasing the spread to 6, and he brought in another run with a double in the seventh. That same inning, Dillon Gee made up for the run he allowed back in the first with an RBI single, and Murphy’s RBI double extended the lead to 10-1. Gee let the bullpen take over in the eighth, leaving with a well-earned win firmly in hand, and the Mets took the game 10-1.

Thursday’s rubber game was rained out, as was Friday’s scheduled first of three with the Marlins, but the Mets will play Miami again at 1:10 PM today.