Rob, a loving and lovable pit-mix is in need of a new home after his adopter fell on hard times and returned him to the animal shelter. 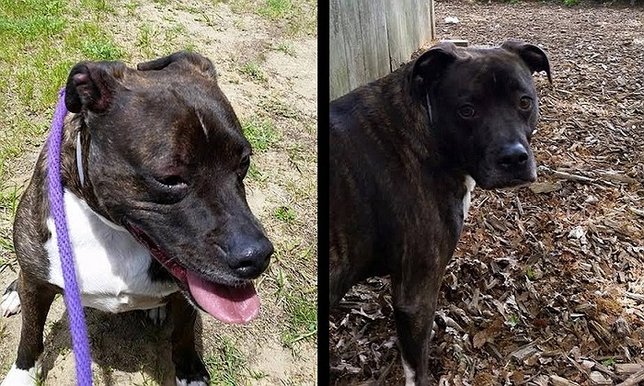 Rob the dog is in great need of a new home.

A local dog with an unassuming name has had a particularly rough go of life.  Rob, an affectionate black and white pit-mix who has spent most of his days living in the confined space of a shelter is currently residing at Brookhaven Animal Shelter—waiting patiently for a new friend to bring him home—but there is more to his story than simply being in need of a family to love and a yard to call his own.

This is actually Rob's second stay at Brookhaven; his first lasted for years until one day a kindly woman came to the shelter and, for the first time in his life, did not pass over the longtime resident. Things were finally looking up for Rob—he had a new home, space to stretch his paws, and a person who loved him—but it was not long before tragedy struck the poor dog once more.

Sadly, Rob's new friend fell on hard times and could no longer afford to take care of the unfortunate pooch. She returned him to Brookhaven Animal Shelter, where once again the now 6-7-year-old dog must wait in quiet hope that another family will take him in, and that isn't even the end of his troubles.

"The staff discovered that Rob had a Grade II mast cell tumor," said local animal advocate, Gina De Haan. "Everyone was devastated. It is difficult enough to find good homes for the many cats and dogs at a shelter, but it becomes nearly impossible when one of them develops cancer."

Rob's tumor was largely removed by a vet; unfortunately the tumor's location on his knee prevented the doctor from being able to remove it all.

"There wasn't enough skin to remove all the cancer cells," explained Ashley Boyd, the director at Brookhaven Animal Shelter. "It is, at this point, a waiting game... His tumor came back as a low grade so it isn't very aggressive, but he does still have cancer cells around his surgery site. He's a wonderful boy and we are hoping to find him a wonderful home!"

"His heart is brimming over with love for human beings," added De Haan. She does note, however, that Rob would be best suited for a single-pet home without any other dogs or cats.

Anyone interested in giving Rob a new lease on life is asked to contact the Brookhaven Animal Shelter at 631-286-4940. The shelter has even offered to assist any prospective adopter with the cost of Rob's medications.