On an idyllic Saturday evening at Belmont Park, American Pharoah made it worth the 37-year wait. 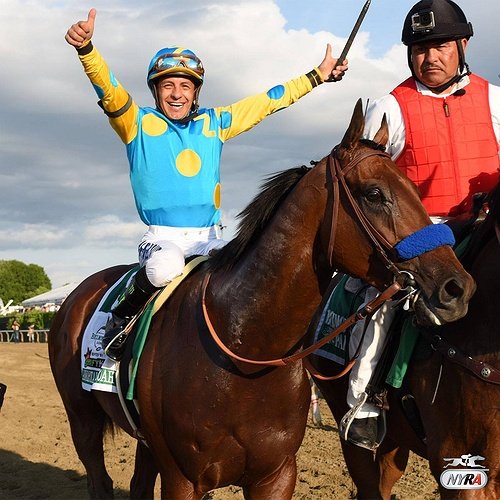 Elmont, NY - June 6, 2015 - On an idyllic Saturday evening at Belmont Park, American Pharoah made it worth the 37-year wait.

Under a perfectly calculated ride by Victor Espinoza, the son of Pioneerof the Nile led the field from start to finish in the Grade 1, $1.5 million Belmont Stakes, drawing away in the stretch to become the first Triple Crown winner since Affirmed in 1978 and end a drought that had seen the hopes of 13 Kentucky Derby and Preakness Stakes winners end in disappointment.

The milestone victory in the 147th 'Test of the Champion' was sweet redemption for the colt's connections, Hall of Fame trainer Bob Baffert and Espinoza, as the pair had accumulated five failed Triple Crown bids between them.

"It's very emotional," said Baffert, who trains American Pharoah for Zayat Stables. "What a feeling. It's probably going to take a few days to sink in."

Baffert first brought a Derby-Preakness winner to the Belmont in 1997, when Silver Charm finished second in the "Test of the Champion," and again in the 1998 edition, in which his Real Quiet lost a heart-breaking photo finish to his nemesis, Victory Gallop.

In 2002, Baffert and Espinoza teamed up with War Emblem in the Belmont, but the son of Our Emblem finished eighth after stumbling at the break.

"He walked into the gate amazing," Espinoza added. "He was ready today. As soon as I sat in the saddle, there was so much power and so much energy this horse had. He trained perfect, just unbelievable coming into the race."

Visions of War Emblem were immediately erased when American Pharoah broke a touch slow out of the gate but quickly assumed control of the early lead, angling to the rail as the field of eight 3-year-olds entered the clubhouse turn of the 1 ½-mile race.

Espinoza, fourth in last year's Belmont with Triple Crown hopeful California Chrome, expertly nursed American Pharoah along with the precision of a rider who had been in his position before.

Horse and rider glided through comfortable splits of 24.06 seconds for the opening quarter-mile and 48.83 for the half. Without any urging, American Pharoah continued his effortless march down the backstretch with 5-1 third choice Materiality lurking on his outside a length behind in second, and Mubtaahij, Frosted, Keen Ice and Madefromlucky looming four abreast just off the top two.

"All I did was just take in the crowd," Baffert said. "The crowd was just thundering and I was just enjoying the crowd and the noise and everything happening."

Rounding the far turn, Espinoza still had yet to ask American Pharoah for run, but the bay colt maintained a steadfast advantage over his competitors as Materiality dropped back and Frosted and Mubtaahij emerged as his most ardent challengers.

Still not asked for his best run at the top of the stretch, American Pharoah kept his rivals at bay. Shortly into the stretch run, Mubtaahij dropped back, leaving only Frosted with a chance to thwart the Baffert trainee's date with destiny.

Finally, sensing the magnitude of the situation, Espinoza gave him a nudge. The outcome was never in doubt.

American Pharoah took off once given his cue, pulling away to win by a widening 5 ½ lengths and completing the distance in 2:26.65, the sixth-fastest in Belmont history and second-fastest for a Triple Crown winner since Secretariat set the track record of 2:24 in 1973.

"We knew we had the horse. We hoped we had the horse," said Baffert. "Once Victor got him in the clear and got him into that beautiful mode of the way he just goes over the ground, I just loved every fraction. I saw 1:13 and change; I loved that. I was talking to [my wife] Jill the whole way around there and turning for home, I was preparing for somebody coming because I've been through this so many times. I was just hoping for once and I could tell at the eighth pole that it was going to happen.

"Thirty-seven years we've waited for this but, you know what, this little horse he deserves it. He's just a great horse and the way he's been all winter and this spring has been incredible."

Frosted, winner of the Grade 1 TwinSpires.com Wood Memorial, ran valiantly to finish second, two lengths ahead of third-place finisher Keen Ice, but was no match for American Pharoah. The two had met five weeks earlier in the Kentucky Derby, in which Frosted finished fourth, beaten 3 ½ lengths.

"My horse ran great, but the horse everybody expected to win won the race," said Frosted's jockey, Joel Rosario. "My horse ran really great and we got second place. It's exciting because we have not seen this for so long and the winner really looked brilliant. My horse showed that he is a really nice horse and there will be lots of races down the road for him."

Keen Ice, seventh in the Derby, gave trainer Dale Romans his second consecutive third-place finish in the Belmont and fourth overall. The Kentucky-based trainer took the defeat in stride.

"The horse was perfect," Romans said of American Pharoah. "My horse ran his race. It's an amazing thing to be a part of. Bob Baffert is the greatest trainer of all time. My hat's off to him."

Mubtaahij, winner of the Group 2 U.A.E. Derby and eighth in the Derby, checked home fourth, followed by Frammento, Madefromlucky, Tale of Verve and Matierality.

"He's a monster," said Irad Ortiz, Jr., rider aboard Mubtaahij. "He's a very nice horse. He's a freak. We haven't had a Triple Crown winner in years. He's a great horse. I tried to be close to him. I kept following him and my horse ran very, very good. We had no excuses. The best horse won the race."

The adulation was ubiquitous for American Pharoah, who returned $3.50 to win as the 3-5 favorite and increased his career earnings to $4.5 million, and for once, there was no talk of the winner's future plans after the race. Baffert, Espinoza, and the Zayats just savored the moment.

"This is going to be, the moment," said Baffert. "We'll never forget this."