The Suffolk County Police Department is investigating a bank robbery that occurred at a bank in North Lindenhurst on June 5. 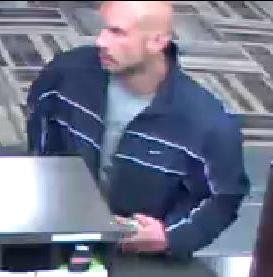 A male suspect entered the Citibank, located at 120 Sunrise Highway, at approximately 3 p.m., and passed a note to a teller demanding cash. The teller complied with the robber’s demand and handed the suspect an undetermined amount of cash.

The suspect fled on foot northbound on Fulton Street. He is described as a white male, bald, and unshaven. He was wearing a red shirt and grey sweat pants.

This robbery appears consistent with recent bank robberies occurring between May 19 and June 5.

The prior robberies are as follows:

The attached surveillance photos of the suspect are from the Capital One Bank robbery in Deer Park on May 24.

The Suffolk County Police Department is advising local banks and financial institutions to be aware of this pattern and to call the police if they are aware of anything suspicious at their banks.

The Suffolk County Police Department is asking the public if anyone has information concerning these robberies, or the suspect involved to contact Crime Stoppers at 1-800-220-TIPS. All calls will remain confidential.