Speaks in front of Russian diplomatic compound in Upper Brookville. 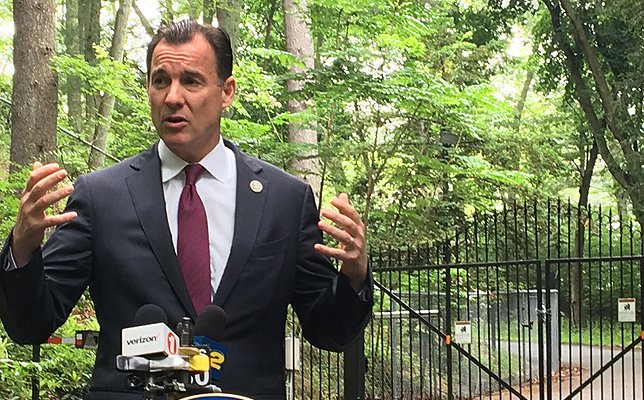 New York, NY - June 5, 2017 - Today, Congressman Tom Suozzi (D — Long Island, Queens) announced that he will soon be introducing bipartisan legislation that will target Russian corruption and their illicit financial activities, which they use as a strategic tool to promote their interests while harming democracies here and in Europe. You can watch Congressman Suozzi’s press conference in full here.
“This is not about President Trump and this is not about the Democrats versus the Republicans. I want to try and focus on a very serious threat that is happening to western democracies throughout the world right now. The Russian oligarchs surrounding Putin are using corruption to discredit our open societies and strengthen their sphere of influence. By using investments in strategic sectors, Russia seeks to gain influence over other countries’ economies and their ability to make their own policy decisions. We’ve seen this before with their interference with free and fair elections, buying off elected and appointed officials, spreading propaganda through media outlets across Europe and Eastern Europe and money laundering, among other nefarious activities.
“My bill will monitor Russian corruption in Europe and Eastern Europe to make sure we identify these threats. There’s something very dangerous going on in the world right now with the influence of billions of dollars by the Russian government and oligarchs exporting propaganda and exporting their efforts to try and corrupt democracies throughout the western world,” said Congressman Suozzi.
Congressman Suozzi held the press conference in front of a former Russian diplomatic compound in Upper Brookville, which is in his congressional district. President Obama closed the compound in December 2016, launched sanctions and expelled diplomats in response to intelligence reports that Russia meddled in the 2016 presidential election. President Trump is currently considering allowing the Russians to reopen the compound.
The bill would establish within the State Department the Office of Anti-Corruption Relating to Illicit Russian Financial Activities in Europe, which would analyze Russia’s financial networks in Europe, relating to investments in strategic sectors, including real estate, energy, media and infrastructure, among others. They’ll work with the Treasury Department to train U.S. diplomats in working with foreign partners in uncovering and prosecuting illegal Russian financial activity, among other things. The office will also work with our NATO allies in elevating anti-corruption as part of NATO’s Readiness Action Plan.
Congressman Suozzi represents New York’s Third Congressional District. He serves on the House Foreign Affairs Committee and the House Armed Services Committee. He is Vice-Chair of the bipartisan Problem Solvers Caucus, which is made up of 22 Republicans and 22 Democrats working together to find solutions.