If there’s ever been a more underrated element to a worldwide phenomenon it is that of the contribution of women to that of Rock’n’Roll. 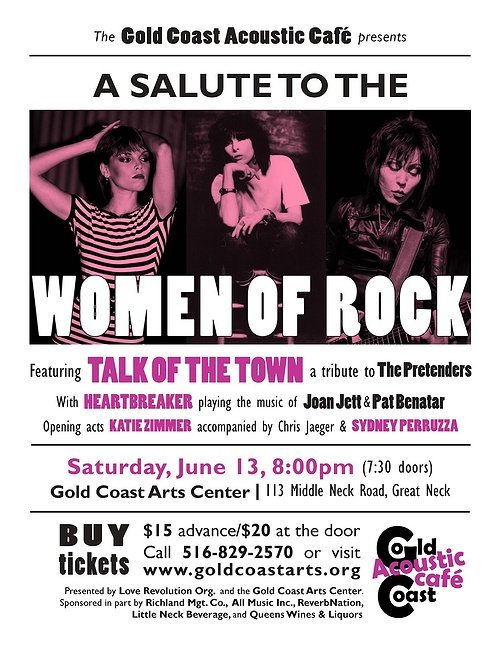 Great Neck, NY - June 5, 2015 - If there’s ever been a more underrated element to a worldwide phenomenon it is that of the contribution of women to that of Rock’n’Roll. With the late 60’s and early 70’s came names like Joplin and Slick roaring their way through a mostly male-dominated culture, but they would pave the way through their vision, power, and passion for those like Joan Jett, The Pretenders, and Pat Benatar- the latter of which are being honored June 13th at 8:00pm at the Gold Coast Acoustic Cafe’s “A Salute to the Women of Rock” featuring Talk of the Town (Pretenders tribute), Heartbreaker (Joan Jett & Pat Benatar Tribute), along with Katie Zimmer accompanied by Chris Jaeger and Sydney Perruzza at the Gold Coast Arts Center, 113 Middle Neck Road, Great Neck, NY 11021.

Talk Of The Town is dedicated to the music of the 80s with a special tribute to The Pretenders. Lead singer Mary Beth Cronin transforms herself into Chrissie Hynde and all six members of Talk of the Town recreate an accurate sound and look from the 80s decade. With HEARTBREAKER, you’ll get the music of Joan Jett & Pat Benatar played the way it is meant to be played- passionately and with the same high energy and intensity of the real deal!

Opening the show will be Gold Coast’s own “Your Big Break” Contest star Katie Zimmer with Chris Jaeger and Sydney Perruzza. The young up-and-coming vocalist has also sang at Oheka Castle, the Chelsea Mansion for Ed Mangano, at the Long Island Ducks Stadium, and on several episodes of MadHouse TV. She’s  made it to the top 100 finalists of the New York X-Factor Auditions as well.

With this many powerful local stars paying tribute to the Women of Rock they take their influences from, it will be an exciting night not to be missed, and an entertaining evening of music for all! To see for yourself on Saturday, June 13th at 8:00PM head to the Gold Coast Arts Center, 113 Middle Neck Road, Great Neck, NY 11021.