When to Watch California Chrome and the Belmont Stakes

California Chrome will attempt to take home the Triple Crown in Elmont on Saturday. 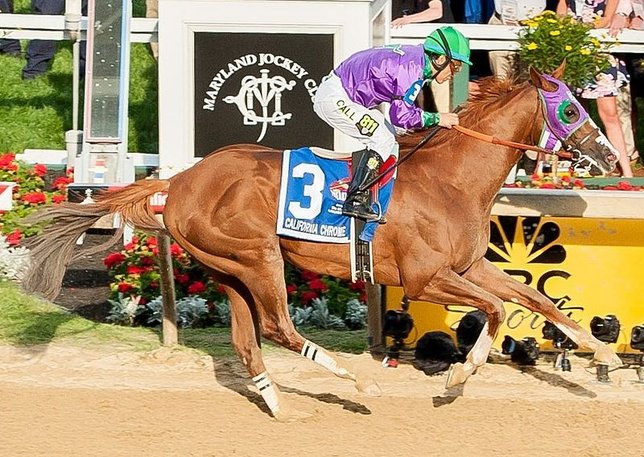 All eyes are still on California Chrome heading into Saturday’s Belmont Stakes race. The Kentucky Derby and Preakness champion was afforded the right to wear a breath-assisting nasal strip last week and is now a 3-5 favorite to sweep the Triple Crown.

The Alan and Art Sherman-trained horse will be running out of the gates from the #2 position. His closest competitor in pre-race gambling,  Wicked Strong, will be in the #9 position and was given 6-1 odds as of Wednesday.

“I feel better about this race than I have any other race, to be honest with you, just looking at the horse and saying, 'wow,' ” said Art Sherman. “I see how far he's advanced. I know it'll be tougher going a mile and a half, but this horse is a good horse. I think he's the real McCoy. They better worry about me, I can tell you that.”

If California Chrome can win the Belmont Stakes he will be the first horse in 36 years to place first in all three Triple Crown races.

Coverage of the race, and several others which will take place beforehand, will be aired by NBC and the NBC Sports Network. The post time for the 146th Running of the Belmont is 6:35 PM on Saturday, June 7th. After the race NBC is also scheduled to air the second game in the Stanley Cup finals between the Rangers and the Kings at 7:00 PM.

For those heading to Belmont Park in Elmont on Saturday, the MTA has added 18 extra trains from Penn Station, and the LIRR will be running trains back to Penn and Jamaica until at least 10 PM depending on the number of passengers looking to catch a ride. The Jamaica to Belmont connection (a 12-14 minute ride) may be the best route for Long Islanders coming from points east via train as well.

An Elmont Shuttle will also be running to Belmont Park on Plainfield Avenue across Hempstead Turnpike and on to Elmont Road. It will turn east at Dutch Broadway, north on Mecham Avenue, and across Hempstead Turnpike toward Covert Avenue. Once at Tulip Avenue, the bus will turn west and return to Belmont Park. This shuttle will be stopping at all MTA LI Bus stops along its path.

Alcohol will be prohibited on both LIRR trains and at Belmont Park, and bags will be subject to searches by MTA police.