The event paid a special tribute to IDF Lone Soldiers from the community. 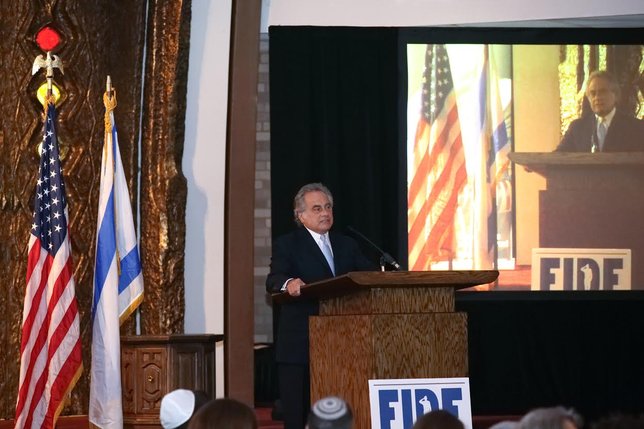 Cedarhurst, NY - May 30, 2014 - More than 500 prominent supporters of the Long Island Chapter of Friends of the Israel Defense Forces (FIDF) from across the Five Towns and Greater South Shore area gathered for their Third Annual Community Event in Cedarhurst yesterday at the Sephardic Temple. The event raised over $350,000, which will go toward FIDF wellbeing and educational programs for the brave men and women of the IDF.
Benjamin Brafman, a criminal defense attorney and founder of Brafman and Associates, who served as master of ceremonies for the third year in a row, said the FIDF stands out in its unrivaled support for the soldiers.
“FIDF has recognized the different struggles faced by different soldiers, and aim to meet them all. No soldier has the same story: some carry the name of a lost loved one into battle, others the weight of their family’s financial struggles, and some pay the sacrifice of a severe wound or trauma in defense of their country. The stories of the Israeli army are many, but two things are true for all of them - the strength of our soldiers is unmatched, and FIDF will be there for them all,” he said.
The event paid a special tribute to IDF Lone Soldiers from the community. David Golombeck, a Lone Soldier originally from Lawrence who currently serves in the Netzach Yehuda Battalion, made an emotional surprise visit to see his family. The FIDF Lone Soldiers Program supports IDF soldiers with no immediate family living in Israel financially, socially, and emotionally.
The event also hosted soldiers who traveled to Long Island from Israel to share their stories with FIDF supporters. The soldiers included Major Benimin Meir, commander of draftee training in a Givati training base, and Captain Tamar Aizenman, a commander in the communications battalion 272 who gave a powerful speech about her father and grandfather who were both killed during service in a battle to protect Jerusalem.
“I would like to take the opportunity to thank you for being a part of my circle, through your support of the IDF and especially through adopting our brigade. My role is to fight and protect the country, and you have filled the role of protecting me, and giving me, and my fellow soldiers, the ability to continue to fight. Thank you for everything you do,” said Major Meir.
The evening’s program included a ceremony to recognize the achievements of the Five Towns and Greater South Shore community. One of the main achievements of the community is their adoption of the Givati Brigade through the FIDF Adopt-A-Brigade Program, which provides funds for various wellbeing and recreational needs for the benefit of all soldiers in the brigade, including soldiers in-need and Lone Soldiers. Some of the other achievements that were recognized included $100,000 raised for the Lone Soldiers who have left their country of origin to make Aliyah and join the IDF, and $152,000 raised for the Spiritual Needs Program, which helps soldiers celebrate their heritage and Jewish traditions. All of the funds raised for the Spiritual Needs Program will be matched dollar for dollar.
For more information about the FIDF Adopt-A-Brigade Program, click here.
For more information about the FIDF Spiritual Needs Program, click here.
For more information about the FIDF Lone Soldiers Program, click here.
Among the distinguished guests in attendance were FIDF National Board Member, Ronny Ben-Josef; IDF Liaison Officer to United States Marine Corps, Lt. Col. Dado Bar Kalifa; Congressional Candidate, Bruce Blakeman; Congressional Candidate, Frank Scaturro; Nassau County DA, Kathleen Rice; and Prosecutor Todd Kaminsky.
About Friends of the Israel Defense Forces (FIDF)
FIDF was established in 1981 by a group of Holocaust survivors as a 501(C)(3) not-for-profit organization with the mission of providing and supporting educational, social, cultural, and recreational programs and facilities for the heroic men and women of the IDF. Today, FIDF has more than 120,000 loyal supporters, and 15 regional offices throughout the U.S. and Panama. FIDF proudly offers its support to the IDF soldiers and their families through a variety of unique and innovative programs. These opportunities reinforce the vital bond between the communities in the United States, the soldiers of the IDF, and the State of Israel. For more information, please visit: fidf.org.
Photos via Lenny Groysman