Melville, NY - May 31, 2018 - Suffolk County Police Homicide Squad detectives are investigating a plane crash that killed a pilot in Melville on Wednesday, May 30, 2018.
A North American T-6 Texan, which left Republic Airport in East Farmingdale, crashed into a wooded area on Northcote Drive in Melville at approximately 1:50 p.m. 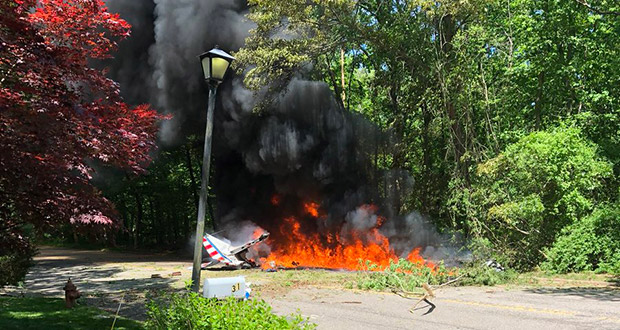 Moments after the plane crash on Northcote Drive in Melville. Photo Credit: Lauren Peller
The pilot, Kenneth Johansen, 52, of Doylestown, PA, was pronounced dead at the scene by a physician assistant from the Office of the Suffolk County Medical Examiner. No one on the ground was injured and no structures were involved in the crash.
The T-6 Texan and five other planes that form a part of the Geico Skytypers Air Show Team, were traveling from Republic Airport to Maryland.
The Federal Aviation Administration was notified and responded to the scene. The National Transportation Safety Board will continue the investigation to determine the cause of the crash.