Bay Street Theater Presents "The Man In The Ceiling"

Sag Harbor, NY - May 30, 2017 - Bay Street Theater is pleased to announce that THE MAN IN THE CEILING, Book by Jules Feiffer, Music and Lyrics by Andrew Lippa, and Directed by Jeffrey Seller, producer of Hamilton will run May 30 - June 25. Single tickets are now available calling the Box Office at 631-725-9500 or online at www.baystreet.org.
The production stars Jonah Broscow as Jimmy Jibbett, Andrew Lippa as Uncle Lester, Erin Kommor as Lisi, Brett Gray as Charlie Beemer, Danny Binstock as Father and Nicole Parker as Mother. 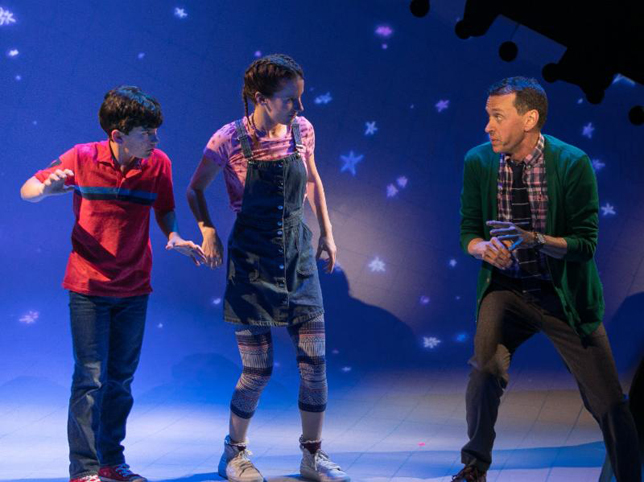 Jonah Broscow, Erin Kommer, Andrew Lippa. Photo Credit: Lenny Stucker
THE MAN IN THE CEILING is about Jimmy Jibbett, a boy cartoonist. A hopeless aptitude if you listen to his father, who wants Jimmy to play ball like a real boy. You'd think his mother would stick up for him, but she's too busy, running here, there, everywhere. Besides she's got her brother Lester to worry about. He writes musicals, but he can't come up with a love song. So Jimmy's only true support becomes the comics characters he invents until, one day, he discovers way up on the ceiling, something new and surprising that will change him and his family.
"I am thrilled this new musical will open the 2017 Mainstage Season at Bay Street, continuing to affirm our deep commitment to the production of new works for the stage," says Artistic Director Scott Schwartz, "Jules Feiffer, Andrew Lippa and Jeffrey Seller are renowned theater artists, and all of us at Bay Street so look forward to working with them as they create this world premiere. THE MAN IN THE CEILING was featured as a reading in the 2016 Bay Street New Works Festival and it is a pleasure to be able to take this new work we have helped develop and bring it to life in full production." 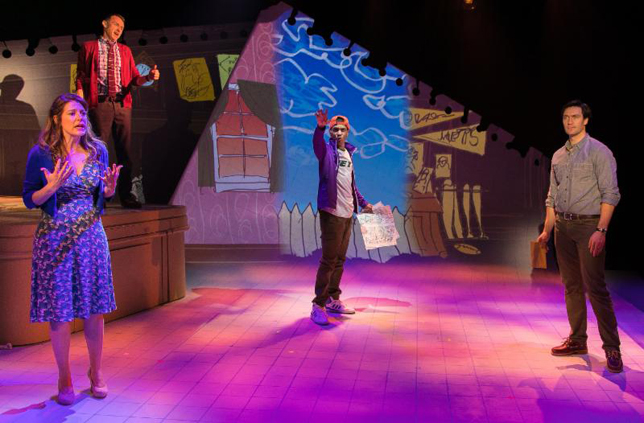 Nicole Parker, Jonah Broscow, Brett Gray, Danny Binstock. Photo Credit: Lenny Stucker
Jules Feiffer has won a number of prizes for his cartoons, plays, and screenplays, including the Pulitzer Prize for editorial cartooning. He illustrated the children's classic, The Phantom Tollbooth. His books for children include The Man in the Ceiling, A Barrel of Laughs, A Vale of Tears, I Lost My Bear, Bark, George, and Rupert Can Dance. His plays and screenplays include Little Murders, Carnal Knowledge, Grownups and Popeye. Presently he is at work on his noir graphic novel trilogy, Kill My Mother. He lives on Shelter Island, New York.
Andrew Lippa's new hit song "Evil Like Me" appears in Disney's Descendants. Written for Kristin Chenoweth the soundtrack hit #1 on the "Billboard 200" album chart, #1 on the iTunes and Billboard soundtrack charts, and has been viewed over 27 million times on YouTube. Recently, Andrew composed and conducted a world premiere piece for the international piano virtuoso Lang Lang and the Guangzhou Symphony Orchestra in Guangzhou, China. This new work, a 32-minute, 5-movement piece called "Rising Tide", will be reprised later in 2016 and recorded in China. Lippa's epic Concept Opera "I am Anne Hutchinson/I Am Harvey Milk" had its world premiere at The Music Center at Strathmore in April of this year starring Kristin Chenoweth as Anne Hutchinson and Mr. Lippa as Harvey Milk. This summer is the US premiere of "Life of the Party" - a musical compendium of Mr. Lippa's career - produced by Theatreworks in Mountain View, CA and starring Mr. Lippa.  Broadway credits include: Music and lyrics for Big Fish directed and choreographed by Susan Stroman; the Tony-nominated music and lyrics for the Broadway musical The Addams Family as well as the music for Aaron Sorkin's Broadway play The Farnsworth Invention. Other musicals include the Drama Desk award winning musical The Wild Party (book/music/lyrics); A Little Princess (music);  john & jen (music/book);  Asphalt Beach (music and lyrics); and You're A Good Man, Charlie Brown (additional music/lyrics and arrangements). A graduate of the University of Michigan, Mr. Lippa serves as president of The Dramatists Guild Fund. He was born in Leeds, England and grew up in suburban Detroit. 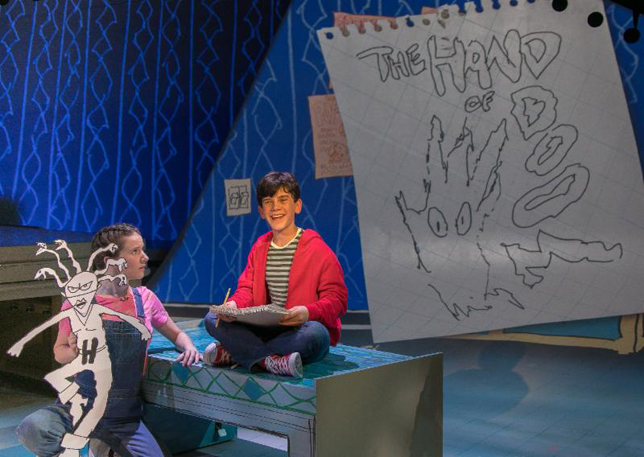 Erin Kommer and Jonah Broscow. Photo Credit: Lenny Stucker
Jeffrey Seller is the winner of four Tony-Awards for Best Musical:  Rent (1996), Avenue Q (2003), In the Heights (2008) and Hamilton (2015). Two of the musicals, Rent and Hamilton, won the Pulitzer Prize for Drama.  Jeffrey has also produced and/or developed De La Guarda (1998), Andrew Lippa's The Wild Party (2000), Baz Luhrmann's production of Puccini's La Bohème (2002), High Fidelity (2006), the Broadway revival of West Side Story (2009) and Sting's The Last Ship (2014) among others.  Seller, along with former business partner Kevin McCollum, created the first ever Broadway lottery for Rent, which for over 20 years has been a popular way to see Broadway shows (often in the first two rows) at an affordable price. First rush ticket and lottery ticket policies. He is the only producer to have produced two Pulitzer Prize-winning musicals, for Rent and Hamilton. Along with opening multiple Hamilton companies across North America and London, Jeffrey is currently developing a television series with NBC Universal as well as a new musical based on the life and music of Cher. He is the artistic consultant for Manhattan Theatre Club's upcoming production of Prince of Broadway, and is directing a new musical based on Jules Feiffer's young-adult novel, The Man in the Ceiling, at the Bay Street Theater this spring.  He directed Fly at Dallas Theatre Center in 2013. Jeffrey grew up in Oak Park, Michigan and is a proud graduate of The University of Michigan.
The production team includes Spencer Liff (Choreographer),Will Van Dyke (Music Supervisor), Ryan Fielding Garrett (Music Director), David Korins (Set Design), Sarah Laux (Costume Design), Howell Binkley (Lighting Design), Daniel Brody (Projections Design), Rick Lyon and Jules Feiffer (Puppet Design), Walter Trarbach (Sound Design), Andrew Diaz (Props Design), and Meg Murphy (Hair and Makeup Design). Casting by Stewart/Whitley.
The 2017 Mainstage Season is sponsored in part by New York State through the generosity of Assemblyman Fred Thiele and State Senator Kenneth P. LaValle; the New York State Council on The Arts, a State Agency; Town of Southampton; The Harold and Mimi Steinberg Charitable Trust; The Shubert Foundation; and fully or partially funded by the Suffolk County Executive's Office. Support for new work comes from The Scott Schwartz New Development Fund and the Joseph Stein New Musical Fund.
For more information or to purchase a 2017 Mainstage Season subscription, log on to www.baystreet.org or call the Box Office at 631-725-9500 Tues.-Sat. 11 am-5 pm.
Bay Street Theater & Sag Harbor Center for the Arts is a year-round, not-for-profit professional theater and community cultural center which endeavors to innovate, educate, and entertain a diverse community through the practice of the performing arts. We serve as a social and cultural gathering place, an educational resource, and a home for a community of artists.