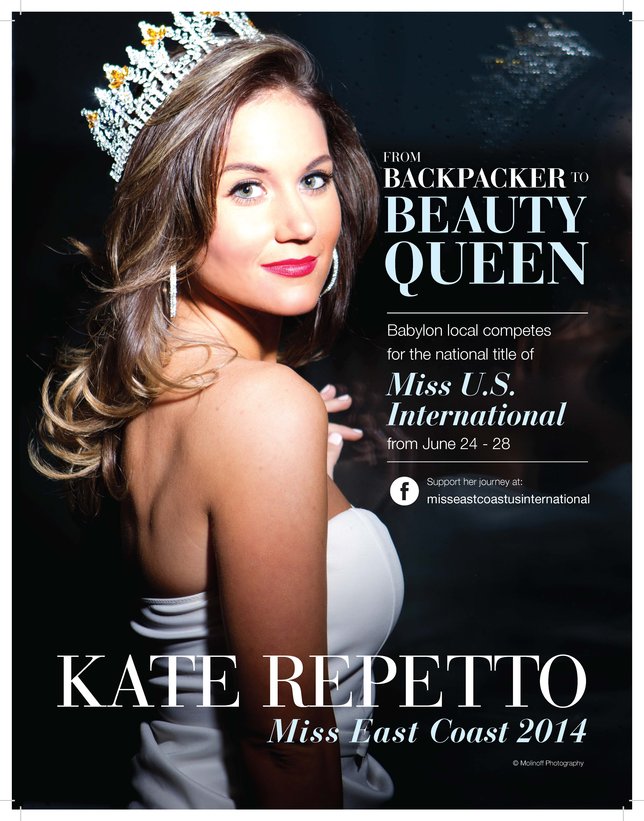 Burton, Michigan - May 27, 2014 -  Katelyn Repetto, of North Babylon, NY, was recently crowned the 2014 Miss East Coast U.S. International titleholder. She will go on to compete against other state delegates at the national 2014 Miss U.S. International pageant in Orlando, Florida. For the next year, Repetto will represent the east coast for the Miss U.S. International pageant system. The winner of the Miss U.S. International pageant will go on to compete against 70 other women from their respective countries at the international finals held in Okinawa, Japan next fall.
At 23, Repetto quit her public relations career in Manhattan to pursue her dream of living abroad. She spent a year teaching English in Bangkok, Thailand and shortly after she moved to Sydney, Australia where she worked and lived for eight months. Repetto says that her experiences overseas have forever impacted her life.
“When I started traveling I knew I would learn about different cultures and meet different people, but the longer I spent abroad the more I realized how similar we all are,” says Repetto. “I believe we need to stop focusing on what makes us different, and start focusing on what makes us the same. To me, that’s that foundation of peace on earth and that’s the message I hope to spread as Miss East Coast U.S International.”
A SUNY Cortland graduate of 2010 and a Disney College Program alum of 2007, she’ll be visiting local high schools and colleges to spread awareness about international work and travel opportunities before she moves to New Zealand this fall.
“The world offers endless possibilities – take advantage of them,” says Repetto. “Find your passion, don’t be afraid to take chances and if you don’t know what you want to do, try everything!”
Repetto shares her traveling adventures at Katefromthestates.com. To follow her journey as a title holder, Like Miss East Coast U.S International on Facebook.
The national competition consists of two proportional segments: evening gown and swimsuit and interview.  Eligible women must meet the age and citizenship requirements to be in the international pageant. During the national competition, a panel of judges will score the contestants on beauty, charm, personality and poise.
The Miss U.S. International pageant is the official preliminary to the MISS INTERNATIONAL BEAUTY PAGEANT® event. Women who meet the eligibility requirements who are interested in participating should contact the national director by email at Britt@MissUSInternational.com, or on the web.
The INTERNATIONAL CULTURAL ASSOCIATION, producers of the MISS INTERNATIONAL BEAUTY PAGEANT®, have been producing the MISS INTERNATIONAL BEAUTY PAGEANT since 1967. MISS INTERNATIONAL began in 1960 in Long Beach, California when the Miss Universe pageant left the city to be held in Miami, Florida. Also called a "Festival of Beauty" and even the "Olympics of Beauty", this pageant is not based on looks alone. Contestants are expected to serve as "Ambassadors of Peace and Beauty", showing tenderness, benevolence, friendship, beauty, intelligence, ability to take action, and, most importantly, a great international sensibility.
Based in Michigan, HARRISON PRODUCTIONS, LLC is an event production company specializing in beauty pageants.  We provide self-improvement opportunities for women through production of high quality competitions. Harrison Productions, LLC holds to the highest standards of integrity and conducts all competitions in a fair and unbiased manner.  We have been producing pageants since 2002.