Supervisor Lupinacci: "The number of arrests for boating while intoxicated has increased on Long Island, in New York State, and nationwide." 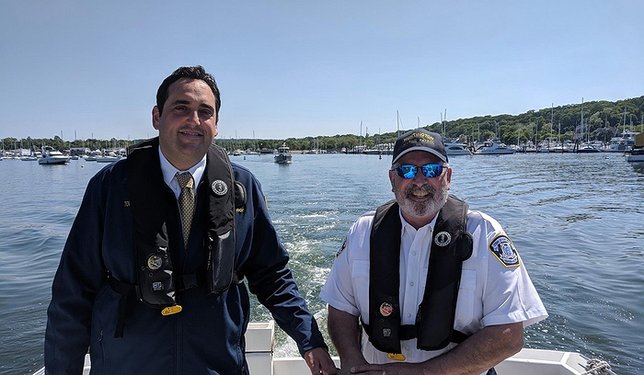 Huntington, NY - May 29, 2018 - Huntington Town Supervisor Chad A. Lupinacci, Senior Harbormaster Fred Uvena and officials from the Suffolk County Police Marine Bureau announced plans to increase enforcement against unsafe and intoxicated boaters in Huntington Town waterways Thursday May 24 ahead of the Memorial Day holiday weekend.
“We encourage safe, responsible boating on Huntington’s beautiful waterways,” said Supervisor Lupinacci as he urged caution: “The number of arrests for boating while intoxicated has increased on Long Island, in New York State, and nationwide. We are here today to remind the public that the Town’s Bay Constables, along with the Suffolk County Marine Bureau, will be out on the waters to enforce boating safety.”
Senior Harbormaster Fred Uvena offered boating safety tips, stressed the importance of having a designated skipper and warned members of the public that it takes only one beer to impair a person weighing 160 pounds.
“If you have two beers, that will put you at .08, you are now BWI. You will be removed from your boat, we will take you to land, run you through a battery of tests and you will be taken to the Second Precinct for processing,” warned Uvena, who encouraged boaters to call his office on channel 16 VHF if they encounter any problems on the water.
Gina Lieneck, mother of 11-year-old Brianna Lieneck, who lost her life in a boating collision caused by an intoxicated boater in 2005, spoke in support of Brianna’s Law, under consideration in the New York State Legislature, which would require mandatory boating safety classes for boaters.
“Education and information the best way to have boating safety and boating safety is the best way to have boating enjoyment,” said Village of Northport Trustee Ian Milligan, Commodore of the Greater Huntington Council of Yacht and Boating Clubs, who voiced support for legislation requiring boaters to be licensed.
The press conference wrapped up with a media boat tour of popular areas where speeding, partying and other enforcement measures are of particular concern.