Responding officers discovered the boat completely under water and the four occupants in need of rescue. 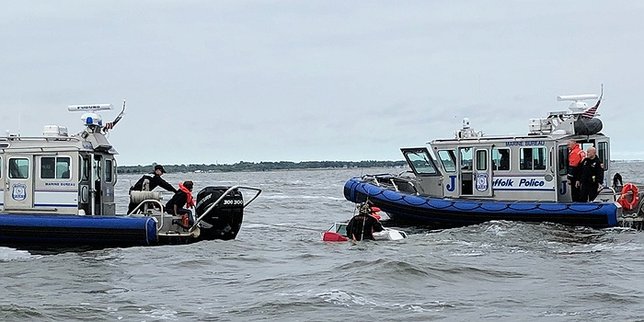 SCPD rescued four people from a sinking boat in the Great South Bay.

Great South Bay, NY - May 29, 2018 - Suffolk County Police Marine Bureau officers rescued two men and two women from a sinking boat in the Great South Bay on Monday, May 28, 2018.
A boater in distress used a cell phone to call Sea Tow’s Great South Bay Headquarters at approximately 5:30 p.m. indicating their boat, with four adults onboard, was taking on water from an unknown problem. An employee at Sea Tow used a marine VHF radio to notify the Suffolk Police Marine Bureau there was a boat sinking ¼ mile south of Timber Point Marina in Great River.
Marine Bureau Officers Robert Reed and James Curley, on board Marine Kilo, and Officers Robert Reuter and Christian Schnoor, on board Marine Juliet, responded immediately and arrived within minutes to find the vessel, a 1987, 19 foot, Four Winns, completely under water and the four people in need of rescue. Some of the victims were wearing life preservers and others clung to floating cushions and a cooler.
The officers assisted all four victims and helped them aboard Marine Kilo. The individuals, Juliann Gibson, 56, of Islip Terrace, Jacqueline Calderon, 53, of Islip Terrace, Charles Doxsee, 57, of Mastic Beach and Kenneth Marmo, 53, of Islip, were all transported to Timber Point Marina and refused medical attention. The officers returned to the sunken boat and towed it ashore preventing it from becoming a navigational hazard.