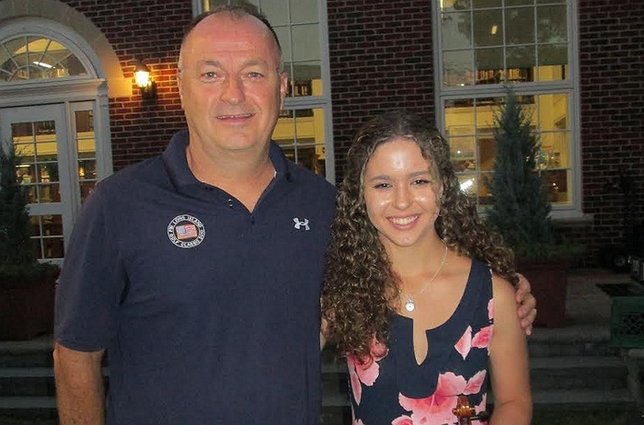 Mastic Beach, NY - May 27, 2016 - For over half a century, aircraft manufacturing took place at a plant in Calverton on land owned by the Navy and known to thousands of folks simply as Grumman, where flight testing and development of Navy jets was conducted. Today, that same land is the largest remaining grassland on Long Island and home to endangered short-eared owls; the illustrious warplanes are all but gone.

Eventually, the Navy would donate some of the land at Calverton to form a National Cemetery, making it the largest national cemetery in the country. But today, in one corner of the airport, lie a small tract housing the Grumman Memorial Park. It has become a local attraction and periodic destination for the William Floyd High School NJROTC cadets.

Gone are the days when aircraft carriers had mostly planes that had been assembled at the Calverton facility, but when textbook pages turn to naval aviation, the cadets head to the memorial, where the centerpiece of the exhibit is a couple of Grumman built aircraft. High up on a concrete pedestal is an F-14 “Tomcat” fighter and located nearby is an attack A-6 “Intruder” all-weather bomber.

Interestingly, both Tomcat and Intruder aircraft can be found as non-flying static displays around the county, like the two here in Grumman Memorial Park. However, several of the last A-6 aircraft were sunk off the coast of Florida to form a fish haven alled "Intruder Reef.”

When the Memorial was dedicated in the year 2000, more than 2,000 people attended and the William Floyd NJROTC was there to present the Colors. In honor of that event, when cadets returned recently, they once again presented the Colors. The endangered short-eared owls enjoyed the pageantry! 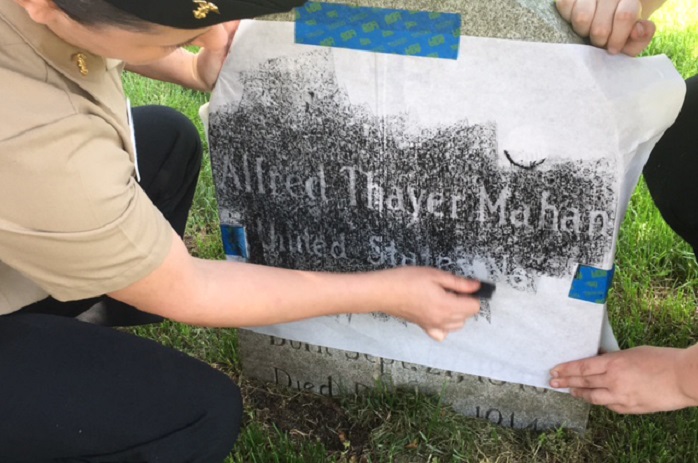 Alfred Thayer Mahan
Let’s see, if you wanted to read about Alfred Thayer Mahan, arguably the most important American strategist of the nineteenth century, where would you look for his book on naval warfare? Well, you might want to check the cadet library at William Floyd High School. The NJROTC just finished a chapter in their textbook devoted to Admiral Mahan and yes, they have a copy of his 1890 book, in fact, they have two copies of “The Influence of Sea Power Upon History, 1660-1783.”

As the cadets will tell you, there are lots of details and lots of pages, all to do with the role of sea power throughout history. Much of his thinking can still be found in Navy doctrine today. In fact, his writing caused an arms race with the United States, Germany, Japan and Britain when initially published.

He was a ship Captain during the Civil War, then a lecturer on naval history and tactics at the Naval War College before becoming College President. His ideas and lecture notes while there became the foundation of his book. Mahan believed a great country needs a great navy.

He became a close friend of Theodore Roosevelt, then Assistant Secretary of the Navy, before he retired in 1896. He eventually wrote more than 100 articles on politics, the importance of sea power and many related topics. His influence was widely recognized and his writing influenced every major navy in the lead up to the First World War.

Knowing all this, the naval science students made plans for a curriculum-based educational class trip. First, they found out he is buried in the Quogue Cemetery here in Suffolk County and not that far from the high school. Second, they got permission to visit, and that no burials were scheduled on the day of their visit to Mahan’s grave. They were also granted approval for to do a gravestone rubbing; much like the drawing you get from rubbing a coin over a piece of paper.

So, armed with materials supplied by the William Floyd High School Art Department, they set out on a Saturday to preserve a bit of history for their classroom. With no threat to his stone, the cadets obtained a couple of really nice headstone rubbings. This was their first attempt at the art form.

Aside from his name, the simple stone marker is just engraved, United States Navy. In honor of the event, cadets formed an honor detail alongside his grave and then presented the Colors.