Candidates vying for New York’s 3rd Congressional District have agreed to address questions and concerns relating to children’s issues and legislation in a moderated forum. 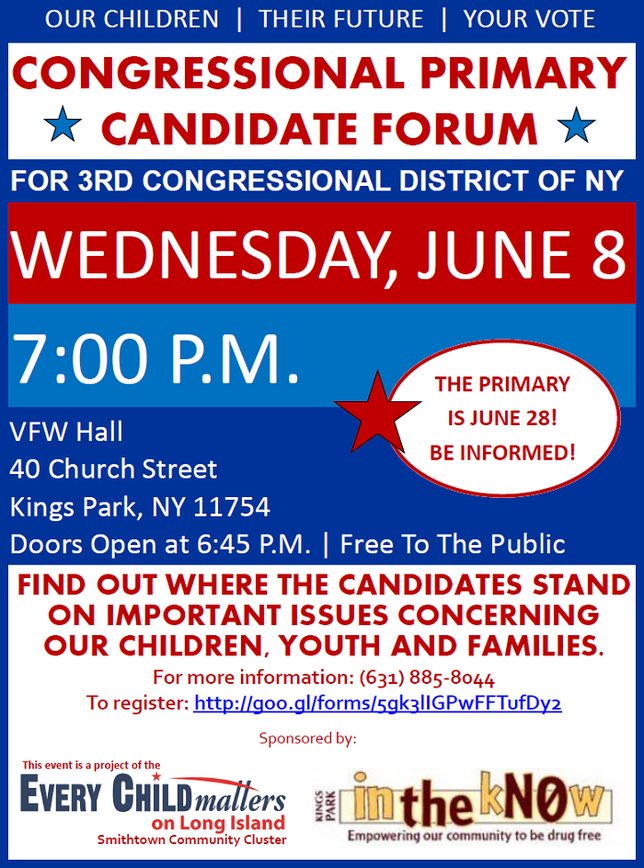 Kings Park, NY - May 23, 2016 - Candidates vying for New York’s 3rd Congressional District have agreed to address questions and concerns relating to children’s issues and legislation in a moderated forum. This non-partisan forum will be hosted by Every Child Matters Long Island and The Kings Park “In the kNOw” Community Coalition and will be held on Wednesday, June 8th at 7:00pm at the King’s Park V.F.W. Hall, 40 Church Street, Kings Park NY. The public is highly encouraged to attend.

New York's 3rd Congressional District is a battleground district in 2016. Incumbent Steve Israel (D), who began serving in Congress in 2001, chose not to seek re-election in 2016, leaving the seat open.

This forum is an opportunity for the candidates to be heard. It is also intended to raise awareness and inform voters about the positions of each political candidate attending on issues that children and families face. Issues that include, access to early childhood education and after-school programs, child abuse and neglect, poverty, drug abuse and health care. “It is up to all of us to reach out to those that represent us and listen, as well as share our own thoughts, on kid’s issues. Children need you to be their voice.” stated Every Child Matters LI Executive Director Shanequa Levin.