Drivers can expect to see sobriety checkpoints and increased patrols by State Police and local law enforcement agencies during this holiday weekend. 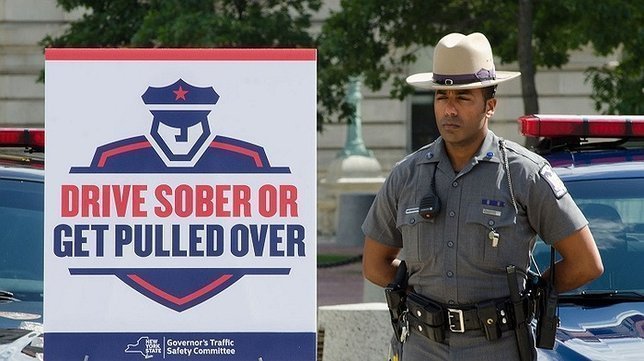 Albany, NY - May 25, 2018 - Governor Andrew M. Cuomo today announced that State Police and local law enforcement will ramp up patrols to combat drunk, impaired and reckless driving this Memorial Day weekend. The STOP-DWI enforcement period starts on Friday, May 25 and runs through Monday, May 28. Memorial Day is one of the busiest travel holidays of the year and police will be out in force to remove impaired and reckless drivers from our highways.
"Impaired driving is reckless, dangerous, and a crime, and state and local law enforcement will be out in full force to keep our roadways safe," Governor Cuomo said. "This Memorial Day weekend, I urge New Yorkers to not get behind the wheel if you've been drinking and make responsible choices to avoid senseless tragedies."
Drivers can expect to see sobriety checkpoints and increased patrols by State Police and local law enforcement agencies during this holiday weekend. Troopers will be using both marked State Police vehicles and Concealed Identity Traffic Enforcement vehicles as part of this crackdown in order to more easily identify motorists who are violating the law. Concealed Identity Traffic Enforcement vehicles allow the Trooper to better observe driving violations. These vehicles blend in with every day traffic but are unmistakable as emergency vehicles once the emergency lighting is activated.
On Memorial Day weekend in 2017, Troopers arrested 237 people for drinking and driving, issued 12,169 tickets, and investigated 146 personal injury crashes which resulted in 190 people injured.  In addition to the New York State Police, numerous counties and agencies throughout the state also participated in last year's Memorial Day Crackdown.
State Police Superintendent George P. Beach II said, "For many New Yorkers, Memorial Day marks the start of the summer travel season which means additional traffic and increased risks on our roadways. As you plan your holiday weekend, remember to make safety your top priority.  Wear your seat belt, remain alert and above all, drive sober. If you do drink, do not get behind the wheel of any vehicle and make arrangements for a safe ride home. Troopers will be vigilant in keeping our roadways safe throughout the holiday weekend and will have zero tolerance for impaired and reckless drivers."
"We want everyone to have a safe and enjoyable summer, and that means being responsible whenever you take to the road," said Terri Egan, DMV Executive Deputy Commissioner and Acting Chair of the Governor's Traffic Safety Committee. "Choosing to drive when you have been drinking or are impaired by drugs can be a life-changing decision for you, your loved ones and so many others, but avoiding a potentially devastating outcome is as simple as picking up your smartphone and making a plan.  The Governor's Traffic Safety Committee is proud to partner with the STOP-DWI Foundation to make it easier than ever to celebrate responsibly.  A few seconds on the 'Have a Plan' mobile app is all it takes to save lives and stay out of trouble."
The GTSC and the New York State STOP-DWI Foundation remind motorists that their "Have a Plan" mobile app is available for Apple, Droid and Windows smartphones. The app enables New Yorkers to locate and call a taxi service and program a designated driver list. It also provides information on DWI laws and penalties, and a way to even report a suspected impaired driver.
According to the Institute for Traffic Safety Management and Research at the University at Albany, drunk driving killed 272 people and injured nearly 6,000 others in New York State during 2016. Another 267 people were killed in drug-related crashes.