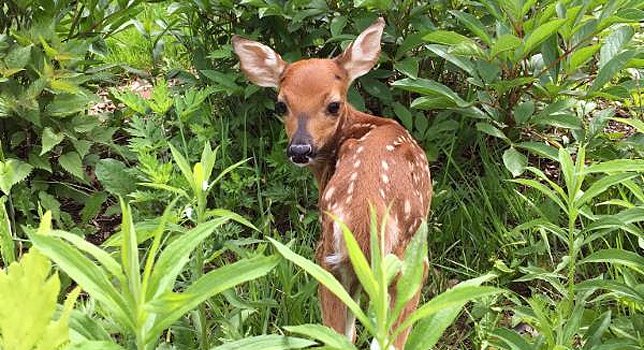 Above is a picture of one of the orphan fawns that was safely captured courtesy of Sweetbriar Nature Center.

UPDATE - May 26, 2017 - The Suffolk County SPCA announced that both fawns have been recovered from Jody Court in Shoreham.
Below is the original report.
Shoreham, NY – May 25, 2017 – On Wednesday, May 24, 2017, a Shoreham resident contacted the Suffolk County SPCA about a female deer that had perished on their property. The mother had recently given birth to baby fawns a few days before. This occurred on Jody Court at approximately 10 am.
One fawn was captured by volunteers of Sweetbriar Nature Center in Smithtown. A whitetail normally gives birth to twins but triplets are also a possibility. If anyone in the area sees a lone baby fawn please contact the Suffolk County SPCA at (631) 382-7722 or you can contact Sweetbriar Nature Center at (631) 979-6344.
Let's help reunite these siblings.