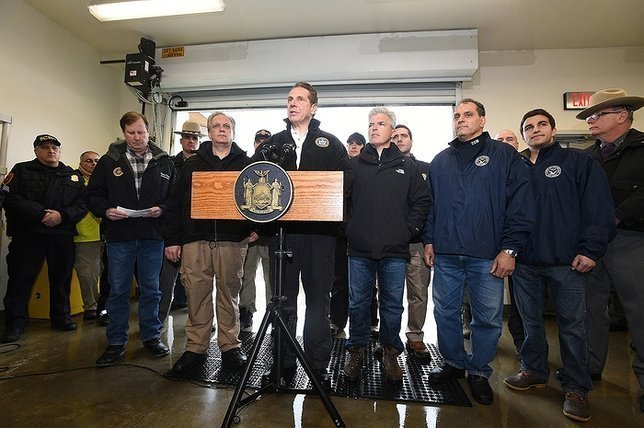 Albany, NY - May 25, 2017 -   The following statement has been issued by New York Governor Andrew Cuomo on the  American Health Care Act:
"The Congressional Budget Office's report confirms what we already knew to be true—ultra-conservatives in Washington have declared war on New York's health care system. What's worse is that Republican members of our own Congressional delegation have aided and abetted in Washington's war against New York, cutting taxes for millionaires while jeopardizing care for seniors, women, the middle class and the disabled.
"The radical Republican health plan will devastate New York's health care system, strip 2.7 million New Yorkers of their health care coverage, and roll back the progress we have made to protect vulnerable Americans. This bill will cost New York State a total of $6.9 billion, including $2.3 billion as a direct result of the disastrous amendment introduced by Congressmen Faso and Collins.
"As radical ideologues race to impose their extremist agenda on Americans, New Yorkers say no. In New York, we will stand up for our progressive principles and protect the right to affordable and quality health care for all. I will continue to work with our Congressional delegation and New York's health care leaders to defeat this reckless legislation."
The American Health Care Act will leave 23 million more Americans uninsured and be disastrous for New York:
The Collins/Faso amendment, which targets only New York, stops counties from paying a share of Medicaid. It would have a devastating effect on New Yorkers:

As a result of the AHCA bill:

The bill punishes New York for its support for women's reproductive rights by threatening to take away citizens' access to tax credits that are intended to make health insurance more affordable:
This bill also includes an amendment that will enable insurers to charge more for people with preexisting conditions in some states, rolling back a key achievement of the Affordable Care Act: