New York, NY - May 25, 2017 - In 2015, DYSTOPIA was not allowed to operate in the state of New York due to complaints from local haunted houses and social justice activists because of the shows violent and graphic nature. The show opened a year after in 2016 at The Haunted Scarehouse in Wharton, NJ and was reviewed well by guests and fans of Fringe Immersive’s work.
The 2016 DYSTOPIA experience was a “beta test” said showrunner Will Puntarich that had people traveling from all over the country to try it, “A woman came all the way from South Carolina, broke her nose while inside and then came out and wanted to do it again so, we let her” says Puntarich. 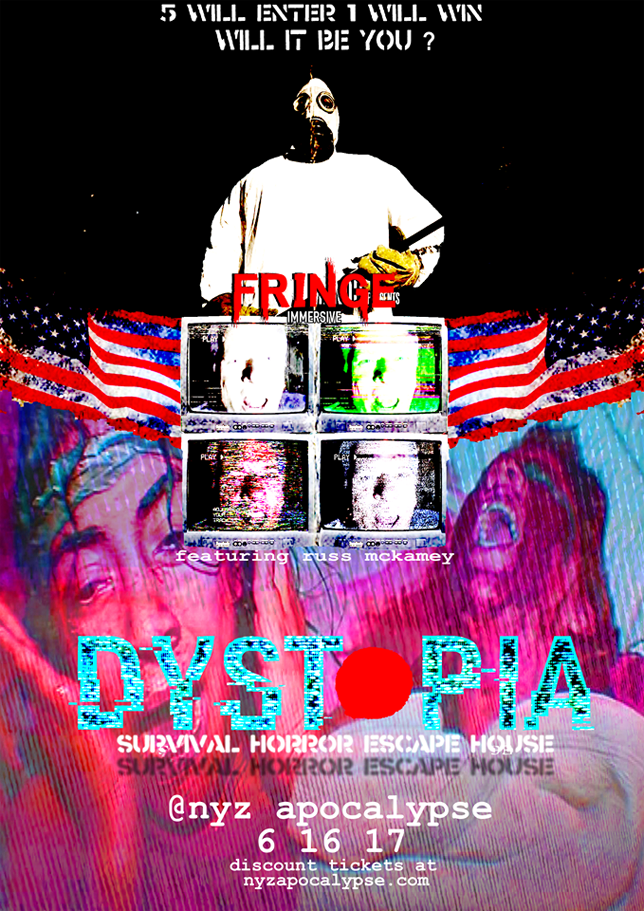 No other injuries were reported and we’re told the experience is not dangerous whatsoever and guests can quit any time, in fact, that is the goal of the show.
DYSTOPIA REDUX is described as a simulated dystopian future where game shows and competition are used to depopulate the planet. Your mission is to make your teammates quit leaving you as the sole survivor and the winner.
There is more to this experience than chills and thrills however. DYSTOPIA is themed around real social issues happening now in America, Puntarich adds “The show is about the potential collapse of Western Civilization our economy, run amok consumerist culture and the current administration in power and what could come after.”
Selected guests will get free entry into the experience and should expect to endure simulated torture, mind control, indoctrination, physical contact with actors, their group and themselves. You’re asked to not wear clothing you care about and that is probably for good reason based on the videos from past events. You will defiantly be getting wet, filthy and most likely putting unknown substances in your mouth. Everyone must sign a waiver at these events and DYSTOPIA is no different, they are not screwing around.
Infamous shock haunter Russ McKamey of the world’s most extreme haunted house, McKamey Manor is a featured actor in the experience, albeit a disembodied head on a TV set dictating what your life will be like inside.
“Russ plays a special role in DYSTOPIA as our villain. He’s a representation of tyranny through morality. Think of him like you would Trump. He has this 80’s style villainy about him that is just authentic” said Puntarich.
The plan is to go LIVE on Facebook as guests tour DYSTOPIA and attempt to survive the experience. To be considered for the experience all you have to do is share the post on NYZ’s Facebook page and tag the four friends you want to compete with in your group.
Tickets are on sale now at: http://www.nyzapocalypse.com/product-page/dread-the-night-dystopia-redux-june-16-2017.
Visit DYSTOPIA REDUX via Facebook HERE!