Wednesday in London, two suspects mowed down a British soldier in their car, and proceeded to hack the victim to death. 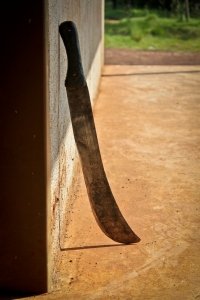 Wednesday, a 25 year old British soldier walking outside of the Royal Artillery Barracks in Woolwich, just outside of London, was violently murdered by two African Islam extremists. The two men randomly targeted the victim, whom they presumed was a British soldier, and hit him with their car proceeding to take his injured body and hacking it with butcher knives in the middle of a very busy public street in a middle-class neighborhood.

The two suspects also filmed the hacking, one suspect weilding a butcher knife, and also a revolver preaching his reasoning to the camera with bloodied hands, "The only reason we killed this man is because muslims are dying daily, this British soldier was an eye for an eye - a tooth for a tooth."

In the video you can see onlookers confused and outraged wandering the street and walking up to the limp bloody body of the British soldier.

Witnesses experienced terror firsthand, most were trying to help a man who was laying in the street motionless, and as they approached they soon realized the nightmare ensuing. Ingrid Loyau Kennett, who was on a bus, noticed the man in the middle of the street and quickly jumped off the bus to go help. Ingrid, a cub scout leader, assumed the man was hit by a car and as she came closer to him, she also came closer to the suspect holding a revolver, and two butcher knives.

"When I went up there was a black guy with a revolver and a kitchen knife. He had what looked like butchers tools, and he had a little axe, to cut the bones, and 2 large knives, and he said, 'Move off the body,' So I thought, 'Okay...I dont know what's going on here' and he was covered in blood. I thought I had better start talking to him before he starts attacking somebody else."

The brave pedestrian did communicate with the enraged suspect, as he rationalized the murder yelling to those watching on in horror.

Another witness, by the name of James, told LBC Radio he saw the men with two meat cleavers a butcher might have.

British Police do follow a policy of not bearing arms, so a firearms unit had to be called to the scene immediately to detain the violent suspects. They arrived only 14 minutes after the incident ensued and gunned down the two suspects, who were hospitalized. The two people were known to British Domestic Security Service and have been connected to suspicious people but themselves were not suspected of criminal or violent behaviors. There are some sources that have knowledge from British services that one of the suspects is believed to be Michael Adebolajo. There is no confirmation of this development by the United Kingdom yet.

Late Wednesday evening, British Prime Minister David Cameron who was in Paris for official meetings, made a statement to the public confirming his belief that it is a small scale terrorist attack by extremists.  The United Kingdom is now investigating the reason and root of the attack as well as actively pursuing any other suspects in the case.

Warning: This video contains graphic content which may not be suitable for some viewers.