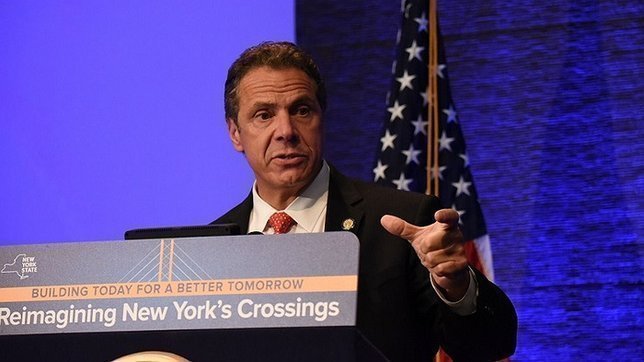 Albany, NY - May 23, 2017 - Governor Andrew M. Cuomo today recognized three emergency medical services providers who died in 2016 as a result of injuries or illnesses sustained while performing their duties. The honorees – Norman Valle, Stephanie Potter, and Larry Fuller, were added to the Tree of Life EMS Memorial on the Empire State Plaza in Albany.
"Every day, these professionals are on the front lines working tirelessly to provide emergency medical services to those who need it," Governor Cuomo said. "For their work, these brave New Yorkers run towards danger in order to help their neighbors and their communities and today we honor three individuals who made the ultimate sacrifice while carrying out their critically important responsibilities."
The ceremony was attended by Lieutenant Governor Kathy Hochul and EMS professionals from across New York State.
"Each and every day the 60,000 men and women who answer the call as emergency medical service professionals put their lives on the line on behalf of their fellow New Yorkers," said Lieutenant Governor Kathy Hochul, who spoke at today’s ceremony. "The three whose names we added to the memorial today represent the very best of us, and we will forever honor their memory and selfless service."
Each year New York State honors the brave men and women that make the ultimate sacrifice while serving their fellow New Yorkers as emergency medical service providers. This year’s honorees join 64 other EMS professionals represented on the memorial.
The EMS providers honored today are:
"Today, we honor three heroes and offer our heartfelt condolences to their loved ones," said New York State Department of Health Commissioner Dr. Howard Zucker. "Their loss is felt by their loved ones, their EMS colleagues and the communities they served. We also pay tribute to the 60,000 EMS providers in New York and thank them for their continued services on behalf of New York State residents."
EMS professionals in New York State include certified first responders, EMTs, advanced EMTs, and paramedics who provide pre-hospital emergency patient care and transport. New Yorkers are served by nearly 2,000 ambulance and emergency medical response and transportation agencies that provide Advanced Life Support or Basic Life Support services.