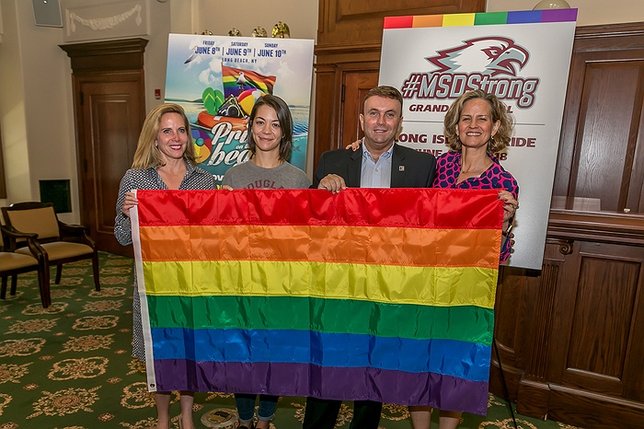 Mineola, NY - May 22, 2018 - Nassau County Executive Laura Curran today joined with LGBT Network President/CEO David Kilmnick to announce Nassau County’s plans to celebrate Long Island Pride and to declare New York State’s largest tribute for those lost in the Stoneman Douglas High School shooting.
“We support Long Island Pride and the LGBT community and will display the Pride Flag and, for the first time in Nassau County’s history, showcase a rainbow dome on the Theodore Roosevelt Executive & Legislative Building.”
“Under the courageous and bold leadership of County Executive Laura Curran, Long Island is taking a huge leap forward in the visibility and support of its LGBT families in Nassau County,” said Kilmnick. “The lighting of the dome in rainbow colors and flying the Pride Flag is more than just a symbolic measure. It sends a loud and clear message that the closet door in local government that has kept LGBT people invisible for so long, is being torn down. A new Nassau has arrived, and it finally includes the voices, lives and experiences of LGBT people”.
On June 10th, 2018, 25 students and five school officials from Marjory Stoneman Douglas High School will travel from Parkland, FL to serve as the Grand Marshals of the 28th Annual Long Island Pride Parade.
“The LGBT Network has been a voice for LGBT people, their families, and support systems of Long Island and Queens for 25 years and Marjory Stoneman Douglas High School’s showing of support is an important way to honor its history of pioneering advocacy and change,” said County Executive Curran.
“We are thrilled to bring many of the brave students and teachers to Long Island Pride, who in the wake of unimaginable tragedy, have started an unstoppable movement to end gun violence,”  said Kilmnick. “The theme for the 2018 Long Island Pride Parade – Brave. Strong. United. – was born out of their tireless activism and determination for change. With the most recent school shooting in Texas taking 10 more lives just a few days ago, their leadership and inspiration and our support for them is needed more than ever. It is one of the highest honors in our 28-year history to recognize the students and faculty advisors of the Marjory Stoneman Douglas High School Gay Straight Alliance Club as the Grand Marshals of the 28th Annual Long Island Pride Parade and pay tribute to Long Island native Scott Beigel who gave his own life to save so many others”.
The students and teachers will also attend a special tribute at the Annual Pride on the Beach Festival, held June 8th to 10th, 2018 in the City of Long Beach. The event will highlight the life of Long Island native Scott Beigel, who died saving his Marjory Stoneman Douglas High School students.
Over 30,000 people from across the United States will attend the three-day Pride Festival, which includes over 30 events across the City of Long Beach, including the boardwalk and the beach.
Funds raised at the Pride on the Beach Festival will benefit the LGBT Network’s life-saving anti-bullying programs in Long Island and NYC school.