The Major Case Bureau reports the arrest of two Hauppauge men on Thursday, May 19, 2016 at 5:42 pm in Syosset. 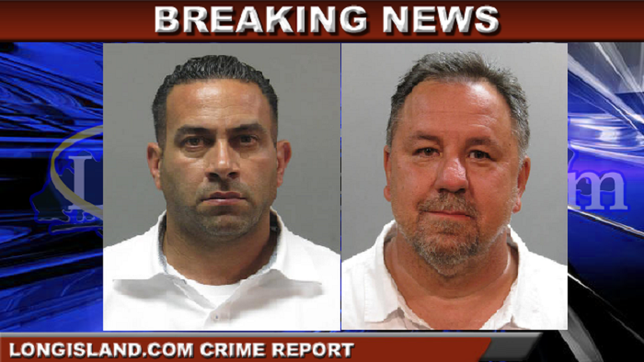 Left to right: Matthew Gatien, 41, and John Crane, 54, were arrested and charged with grand larceny and criminal possession of stolen property.

According to Crimes Against Property detectives, Matthew Gatien, 41, of Hauppauge, purchased two Mercedes-Benz vehicles on May 13, 2016 from Rallye Motors located at 1600 Northern Boulevard, Roslyn.

On May 14, 2016, Gatien cancelled the cashier checks causing a loss of over 175,000 dollars to Rallye Motors.  Gatien and John Crane, 54, of Hauppauge, contacted a car wholesaler and made arrangements to sell both vehicles.  When Gatien and Crane went to deliver the vehicles on Robbins Lane in Syosset they were placed under arrest without incident.  Both vehicles were recovered.