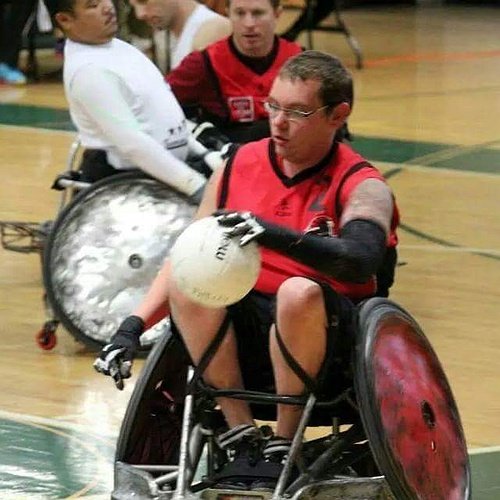 Old Bethpage, NY - May 20, 2015 - Local Patchogue resident, Jarrett Dreyer, plans to participate in Tough Mudder Long Island, a 10-12 mile obstacle course challenge that is the ultimate test of strength, grit, stamina and teamwork. Dreyer is raising funds for an all-terrain wheelchair that will be specially built for him to complete the course. The 26-year-old is a quadriplegic, following a serious accident, and is leaning on the support of his community to help aid in his participation at Tough Mudder Long Island, taking place on August 15 & 16 in Old Bethpage, NY.

Dreyer suffered severe spinal cord damage and three broken vertebrae at age 14 in a sledding accident, leaving him paralyzed and quadriplegic -- a miracle, since doctors expected he wouldn’t survive the night after his accident. Jarrett now dedicates his life to the recovery and support of himself and people like him. His next goal is challenging himself and his team of 6 to complete a Tough Mudder, which he will on August 15 in Long Island.

Dreyer, who is a CNA and Direct Care Counselor, is hoping to raise $2,500 by June 15 in order to ensure the all-terrain chair can be built in time. He is a 2007 Pat-Med graduate and plays for the New York Warriors in the U.S. Quadriplegic Rugby Association. Dreyer also volunteers as a peer mentor at Empower SCI (Spinal Chord Injuries) where he teaches wheelchair skills. Next month, he plans to participate in a 100-mile bike race as well.

“Being able to participate in Tough Mudder is the ultimate challenge for me,” said Dreyer. “The event is a huge challenge for most participants, including me, so I am excited and hopeful for the opportunity to complete a Tough Mudder. I am proud to be a part of the Long Island community and hope they can support me as I take on this next endeavor alongside my team.”

Tough Mudder events have wide appeal—participants (known as “Mudders”) range from veterans to business executives to pageant queens to 81-year-old grandfathers. More than 90% of Mudders sign up as part of a team. And for many Mudders, Tough Mudder is more than just a weekend event—it’s a lifestyle. More than 5,000 Mudders have even had the Tough Mudder logo permanently tattooed on their bodies.

Click here to make a donation to or to share Dreyer’s fundraising page.  Registrations for Tough Mudder Long Island are now open; spectator tickets are also available. For those interested in finding other ways to get involved—and getting a discount on future registration—Tough Mudder is currently on the lookout for volunteers to be a part of the action. For more information, please click here.

About Tough Mudder
Tough Mudder Inc. was founded in 2010 by Will Dean and Guy Livingstone. Considered “Probably the Toughest Event on the Planet,” each Tough Mudder endurance challenge tests participants’ strength, stamina, mental grit and teamwork. In 2015, Tough Mudder will host more than 50 events in the United States, Canada, Mexico, United Kingdom, Ireland, Germany and Australia. For the schedule of event dates and locations, click here.