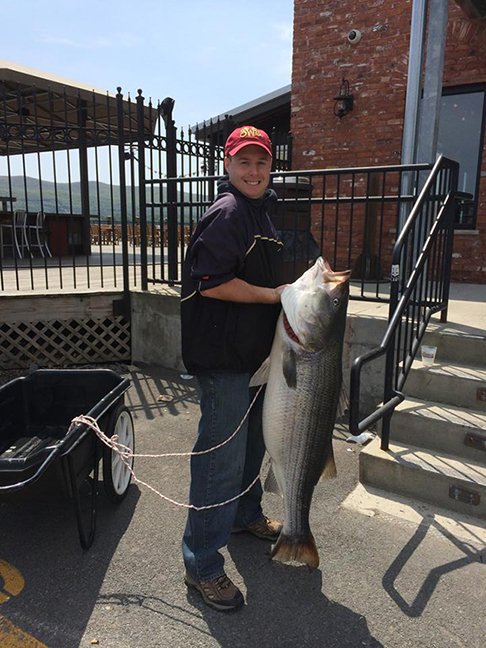 "This is a remarkable new record catch," said Commissioner Martens. "I congratulate Mr. Lester on his success and determination in catching the largest recorded inland Striped Bass in New York and encourage others to take advantage of the many outstanding fishing opportunities New York has to offer."

Angler Eric Lester knew he had a big fish on when a comedy of errors ensued as he fished alone on Newburgh Bay on May 14, 2014. As the fish fought, the reel came off his rod; he managed a quick fix only to find the line tangled around his prop. Despite these difficulties, he was able to successfully land the fish. Mr. Lester, while astounded at the size of the fish, managed to get her on board. DEC biologists estimated the fish to be at least 20 years old.

Mr. Lester submitted details of his winning fish as part of DEC's Angler Achievement Awards Program, which tracks state record fish. Through this program, anglers can enter freshwater fish that meet specific qualifying criteria and receive official recognition of their catch and a distinctive lapel pin commemorating their achievement. The three categories that make up the program are: Catch & Release, Annual Award and State Record.

Although this is a once in a lifetime achievement occurred on the Hudson River, New York, as a member of the Atlantic States Marine Fisheries Commission, is participating in drafting a new coast -wide striped bass management plan addendum. The draft addendum, expected to be released later this summer, will propose regulatory changes to address increases in fishing mortality and decline in the female spawners in coastal populations of striped bass. New York strongly advocates managing our fisheries to result in sustainable harvests for future generations of anglers.

DEC developed the app in partnership with Parks By Nature Network® at no cost to the state. The app is now available for free download in the iTunes App Store and the Android Market for use on iPhone and Android devices.

Further information about the Angler Achievement Awards Program, including a downloadable application form, can be found on the DEC website at: http://www.dec.ny.gov/outdoor/7727.html. Program details and an official entry form can also be found in DEC's current Freshwater Fishing Regulations Guide. For additional information on the Angler Achievement Awards Program contact (518) 402-8891 or email fwfish@gw.dec.state.ny.us.

The NY Open for Fishing and Hunting Initiative is an effort to improve recreational opportunities for sportsmen and women and to boost tourism activities throughout the state. This initiative includes streamlining fishing and hunting licenses, reducing license fees, improving access for fishing and increasing hunting opportunities in New York State.

In support of this initiative, this year's budget includes $6 million in NY Works funding to support creating 50 new land and water access projects to connect hunters, anglers, bird watchers and others who enjoy the outdoors to more than 380,000 acres of existing state and easement lands that have not reached their full potential. These 50 new access projects include building new boat launches, installing new hunting blinds and building new trails and parking areas. In addition, the 2014-15 budget includes $4 million to repair the state's fish hatcheries; and renews and allows expanded use of crossbows for hunting in New York State.