Legend has it that in the 1600s Richard Smith rode a bull around the area to claim land that eventually became Smithtown. 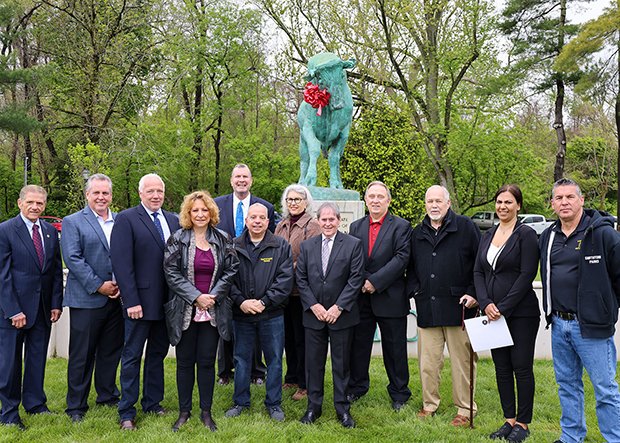 First unveiled on May 10, 1941, Whisper the Bull, the iconic statue that sits at the fork in the road where Route 25 splits off from Route 25a.

Perhaps you’ve seen the big bull and wondered about the backstory.

Legend has it that Richard Smith had been given the land now encompassing Smithtown after he helped rescue the kidnapped daughter of a Montauk Chief. The limit of this land gift was said to be determined by the distance he could ride Smith bull over the course of one day. Historians say that this makes for a nice local myth but is not the actual truth of the matter. According to the Town of Smithtown, Lion Gardiner received a primary portion of the land now known as Smithtown from Grand Sachem Wyandanch, for helping to arrange the safe return of the chief's daughter, who was kidnapped on her wedding night. Gardiner later transferred the rights to the land to Richard Smith, confirmed by a patent granted on March 3, 1665.

The bull myth sustained and became a primary symbol of Smithtown. In the early 20th century, Lawrence Smith Butler proposed the idea of the statue to his friend, Long Island Sculptor Charles Cary Rumsey. The Town says that Whisper the Bull was originally designed in France by Rumsey. The casting of the statue was completed in 1923.

After spending some time in front of the Brooklyn Museum, it was placed in storage. Rumsey’s heirs donated the statue to the Town after his death. In 1941, Butler swayed the Smithtown Town Board to construct a concrete pedestal and raised the $1,750 needed to cover the cost of the move. Butler arranged for the transport of the fourteen-foot, five-ton bronze bull, by way of trucking and rail and on May 10, 1941, the daughter of sculptor Charles Cary Rumsey, Mary Rumsey, presented the statue to the people of Smithtown, set on its pedestal at the Head of the Nissequogue River.

Recently, Town officials joined others, including the Smithtown Historical Society, and direct descendants of Richard “Bull” Smith; Mayor Richard Smith and cousin Jennifer Smith, to celebrate the 80th anniversary of the unveiling of Whisper the Bull on its pedestal in its current location.

In 2019, the Town completed renovations to the monument. Revitalization efforts included the restoration of the concrete base, a new freestanding wall, complete with a “Town of Smithtown” sign, landscaping, and energy efficient lighting. The Town Parks Department is expected to add seasonal plantings surrounding the bull later this month. James Cress Florist in Smithtown created and donated the bow placed on the monument to commemorate the occasion.

“Our hope is that parents will share with their children this little piece of our history today, maybe even share in some fond memories,”  said Town Supervisor Ed Wehrheim.

Wehrheim said that the statue has survived more than a few car accidents and plenty of teenage pranks.

“Whisper has not had it easy,” he joked.